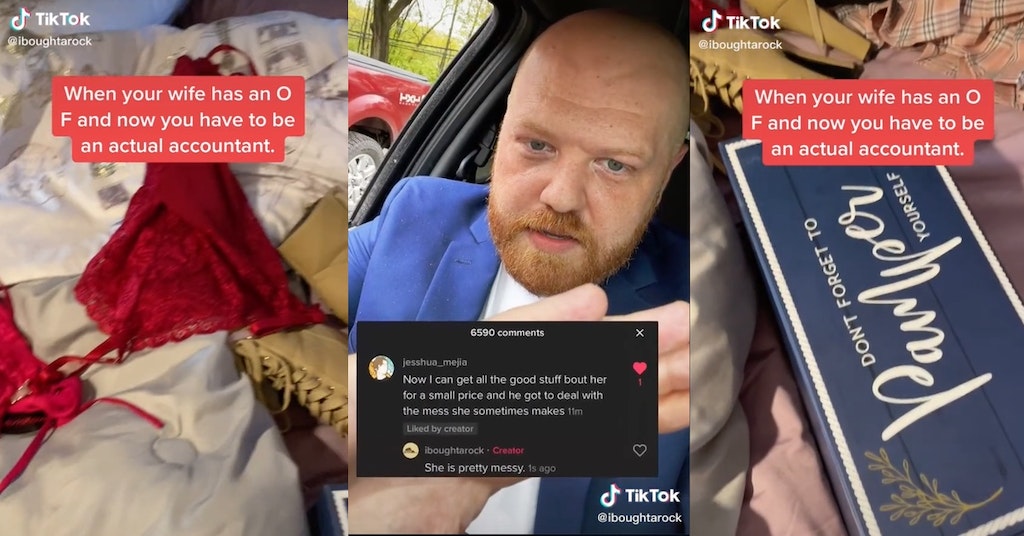 One TikToker’s attempt to be a supportive husband accidentally called up the most misogynistic dredges of the social media platform—and he had something to say about that, too.

Craig, who goes by @iboughtarock on TikTok, posted a short, humorous video about what happens “when your wife has an [OnlyFans] and now you have to be an actual accountant.”

The camera pans over lingerie before cutting to a screen record of him typing “are butt plugs tax-deductible” into Google’s search bar.

Many of the comments were innocuous, either commenting with tax advice or jokes about how interesting his search history must be. And a lot of people praised him for being such a casually supportive husband.

But some men saw it as an opportunity to take jabs at both Craig and his wife for both her decision to start an Only Fans account and his decision to support her.

“So basically she’s not your wife then,” one troll commented.

But Craig made his stance crystal clear when he made a follow-up video addressing one response in particular.

“Now I can get all the good stuff bout her for a small price and he got to deal with the mess she sometimes makes,” @jesshua_mejia wrote.

Craig called it “the absolute purest distillation of what I think is the problem with some of the men in that comment section,” and denounced the idea that women should be valued from their sexuality while everything else is just seen as something to put up with to get the “good stuff.”

“But here’s the thing: I didn’t marry my wife for her sexuality. I married her for the messes,” he said. “We’re a partnership based on our ability to grow and learn, not a sexual exclusivity contract.”

Rather than clap back at the trolls, Craig seems to be hoping to engage in conversation with men who are insecure enough to be making these comments in the first place, as seen in yet another follow-up video.

And in the meantime, both Craig’s TikTok and his wife’s OnlyFans account have only gotten more followers and subscribers, respectively, despite any troll attempts to make them feel bad about their lives.