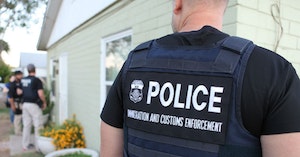 An ongoing lawsuit is alleging that an ICE agent extorted a Honduran immigrant woman over a period of seven years, threatening to have her deported if she didn’t have sex with her and raping her up to four times a week. She was impregnated by this assault three times over the years and is now seeking $10 million in compensation for the physical and emotional damage caused by this horrific abuse.

“She remains in a very fragile psychological state,” said George Kramer, the woman’s lawyer. “She is not only seeking compensation for the physical and emotional damage she suffered but to change the way those who are cooperating with ICE are treated by those in a position of power and who often wield total control over the ability to remain in the United States.”

An ICE spokesperson also told TIME that the agent, Wilfredo Rodriguez, no longer works for ICE.

According to the Honduran woman, whose name has not been released, she met Rodriguez in 2006 after her brother was arrested for entering the U.S. outside of the official paths. When Rodriguez found out that she was also an undocumented immigrant, she was first coerced into becoming an informant for ICE. She cooperated, but in 2007, after she rejected Rodriguez’s advances, he raped her at gunpoint.

No rest until monsters like this federal ICE agent that raped a migrant woman are prosecuted. ICE has a history of inflicting violence against vulnerable migrants. That legacy must end. #AbolishICEhttps://t.co/RcD98hExYa

That was just the beginning of a seven-year period of sexual abuse. The lawsuit also says that Rodriguez repeatedly threatened to kill the woman and her family, and she attempted suicide four times during this period.

In 2014, when she received a call from Rodriguez demanding that they meet, she was so shaken that she fell off the ladder she was using at her construction job and injured her neck, back, and ribs. According to TIME, the lawsuit says that even these serious injuries “didn’t deter him.”

Relief finally came later that year when Rodriguez left ICE, but he threatened her and her family again should she come forward. She kept quiet for another four years until last year, when she met another ICE agent about her father’s asylum application and the story came out.

We cannot remain silent while members of our community are being terrorized by #ICE and #CBP.

This woman’s harrowing story once again brings up concerns about ICE agents abusing the people they have so much power over. Multiple politicians and activists have recently called for ICE to be abolished after crises in Central America—fueled by America’s “war on drugs”—resulted in a mass migration of Central Americans to the U.S.

ICE faced many accusations of physical, emotional, and sexual abuse during this period, as well as charges of creating unlivable conditions in their detention centers that have been compared to concentration camps.