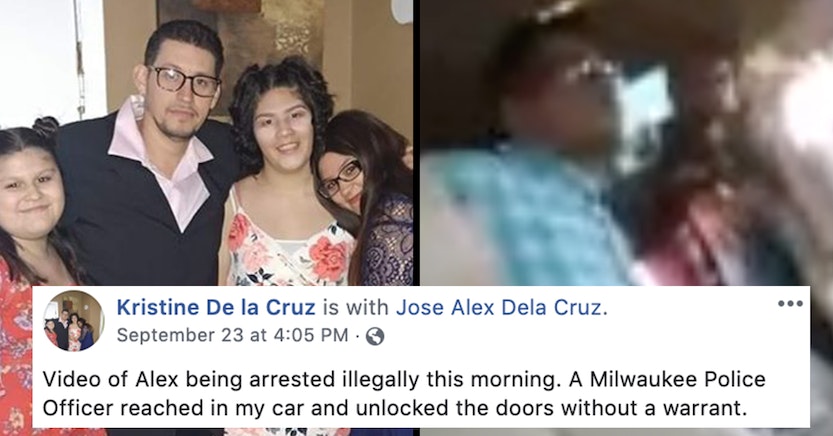 Protests broke out in Milwaukee this week after a woman said the local police department helped ICE arrest her husband, Jose De La Cruz-Espinosa, an undocumented immigrant from Mexico.

Kristine De la Cruz and her family were almost home Monday when they encountered a cadre of ICE agents during a traffic stop, Fox6News.com reported. What’s more, Kristine—who recorded part of Jose’s arrest—said an officer with the Milwaukee Police Department was there to assist.

The video shows the couple’s three daughters crying in the backseat amid the chaos.

“It was so scary,” Kristine told Fox6News. “It was just horrible. There were six ICE agents at our car. Kept knocking at our window. Next thing I knew, another Milwaukee police officer walked up, put his arm into my car, unlocked my car. My doors flew open. My girls were screaming. I just started to cry. … My husband was in handcuffs and gone.”

Kristine shared video of the ICE arrest on Facebook:

Video of Alex being arrested illegally this morning. A Milwaukee Police Officer reached in my car and unlocked the doors without a warrant.

Kristine told Fox6News that Jose, who was on probation for a 2017 gun violation, is the sole breadwinner for their family and was trying to turn his life around—including pursuing legal immigration status.

“It’s the past, and he deserves to have a second chance,” Kristine added. “He is my husband. He is a father. That’s it.”

When word got out about MPD’s role in Jose’s arrest, immigrant rights groups and even the mayor wanted answers.

“They documented the situation, and now they’re part of an organized movement to put an end to family separation and racist laws.”-Christine Neumann-Ortiz introducing the De la Cruz family. #KeepFamiliesTogether #ICEoutofMKE pic.twitter.com/F6tiydyzcH

Voces de la Frontera mobilized a call to action in response to the arrest, scheduling it to coincide with an upcoming public hearing before the Fire and Police Commission.

“What should have been a start to a normal school day, ended up being a living nightmare as a father was forcefully taken from his family,” Christine Neumann-Ortiz, the organization’s executive director, said in a statement. “As ICE escalates their campaign to break up more families under the Trump administration, we call on the public to attend the next public hearing of the full members of the Fire and Police Commission on October 3rd to demand that this measure be passed immediately.”

Milwaukee Mayor Tom Barrett filed a formal request with the city’s Fire and Police Commission for a review of the ICE arrest.

.@ICEgov “physically dragged” Alex away out of his car and away from his three daughters, terrifying and traumatizing his family. These violent arrests have no purpose beyond terrorizing immigrant communities.https://t.co/OM3HWgwyvs

According to Fox6News, Barrett said police officers should focus on violent crimes and drug activity, “while the federal government is responsible to enforce and utilize its resources on immigration issues.”

The involvement of local police in ICE raids has generated controversy across the U.S. in recent months.

BREAKING: We're suing ICE to stop them from making arrests in & around our courts.

When ICE targets witnesses & victims for arrests, noncitizens & immigrants are less likely to go to court to assist in cases or even to protect their own rights. pic.twitter.com/DuKzUVcgON

In Kansas City, Missouri, the police department reportedly provided backup to ICE agents as they arrested Florencio Millan in front of his girlfriend and two children in July—seemingly without a warrant.

Similarly, Kristine told local media that ICE did not initially have a warrant for her husband’s arrest.

The Milwaukee Police Department issued the following statement about the incident:

“On Monday, September 23, 2019, the Milwaukee Police Department responded to a request for assistance from the U.S. Immigration and Customs Enforcement (ICE) on the 2100 block of South 5th Street.

“Before MPD arrived at the scene, ICE agents had conducted a traffic stop of a vehicle. ICE agents advised MPD officers that they had a warrant for a subject located in the vehicle, later identified as Jose De La Cruz-Espinosa, and that the subject refused to exit the vehicle. De La Cruz-Espinosa was on probation for a 2017 Milwaukee County case for illegally concealing a firearm.

Jose is currently being held at the Dodge County Correctional Facility as Kristine works to raise money for an immigration lawyer. Donate to their GoFundMe fundraiser here.