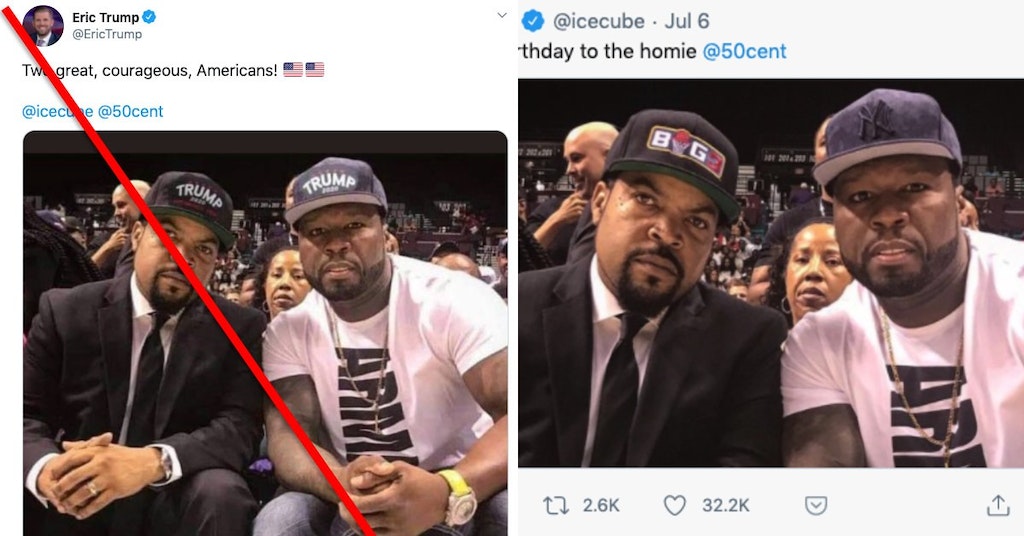 
Eric Trump started his day on Twitter badly when he tweeted out a manipulated photo of famed rappers Ice Cube and 50 Cent posing in Trump hats together, tagging both and calling them “great, courageous, Americans.” Eric had to delete the tweet after Twitter flagged it as “manipulated media.” Both artists were wearing basketball hats in the original photo as they celebrated 50 Cent’s birthday, as Ice Cube posted on his own account in July.

50 Cent recently announced his support for Trump after finding out the highest potential tax rates under Joe Biden's plan, but Ice Cube has not explicitly supported either candidate. He did help the Trump campaign create a "Contract With Black America" which makes an ambitious (albeit vague) promise to "increase access to capital" among Black communities by $500 billion.

However, he was clearly not pleased with Eric Trump posting a stolen and manipulated version of his photo. Ice Cube made it clear in an interview with CNN that he is willing to work on his vision with whichever president wins and is not promoting or siding with either.

His message to Eric on Tuesday was much simpler.