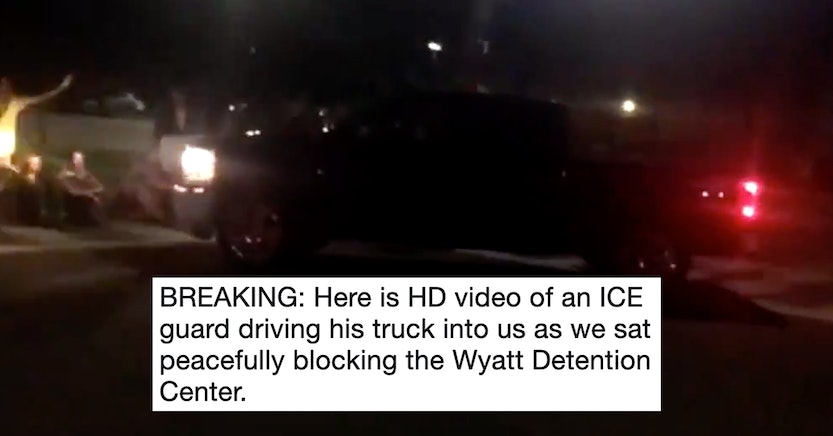 A man, allegedly a correctional officer, ran over a group of peaceful Jewish demonstrators with a pickup truck on Wednesday night. The demonstrators, mostly associated with the group Never Again Action, were protesting ICE outside the Wyatt Detention Center in Rhode Island.

BREAKING: Tonight we experienced a tiny sample of the violence ICE uses on our immigrant neighbors every day. An ICE guard drove his truck into our peaceful #JewsAgainstICE protest, then other guards came out and pepper sprayed the crowd.

Five protesters were injured from being hit with the truck and two were taken to the hospital for their injuries.

Never Again Action is a Jewish group that advocates for the rights of migrants detained by ICE. They have been responsible for temporarily dismantling ICE detention centers across the country.

“As Jews, we were taught to never let anything like the Holocaust happen again. We refuse to wait and see—we know from our own history what happens next. Many of our ancestors narrowly escaped from conditions like what we are seeing today in concentration camps at the border and detention centers around the country,” says the Never Again Action website.

The group of 40-50 protestors gathered at the Donald W. Wyatt Detention facility in Central Falls on Wednesday evening. They linked arms and blocked the entrance.

At around 10 p.m, a pickup truck drove up to the crowd blocking the entrance. Then, according to footage uploaded to Twitter, the truck runs through the peaceful demonstrators.

BREAKING: Here is HD video of an ICE guard driving his truck into us as we sat peacefully blocking the Wyatt Detention Center.

We’re putting our bodies on the line because we see the camps and the roundups. We’ve learned from our ancestors: NEVER AGAIN FOR ANYONE. pic.twitter.com/KnOu5xoOEb

According to Ann Anthony, one of the protest’s organizers, the group alleges that the driver was a correctional officer at the facility.

“The driver was in his uniform when he hit the protestors. His rank and name were embroidered on his shirt and he was wearing a badge at the time,” Anthony told Newsweek.

After the truck attack, officers can be seen in the video pepper spraying the protestors.

After the first ICE guard ran us over with his truck, the rest of them ran over & pepper-sprayed us. The police present just stood by and watched, doing nothing.

“The truck came barreling towards us, and was clearly trying to run us over,” said protestor Jared Goldstein. “This was a group of peaceful protestors who were pepper sprayed and almost run over by correctional officers from the same facility we were here to protest.”

This is not the first time a car has been used as a weapon in a protest situation. In August 2017, Heather Heyer was killed during the Charlottesville protests by white supremacist and neo-Nazi James Alex Fields, Jr. Fields was sentenced to life in prison.