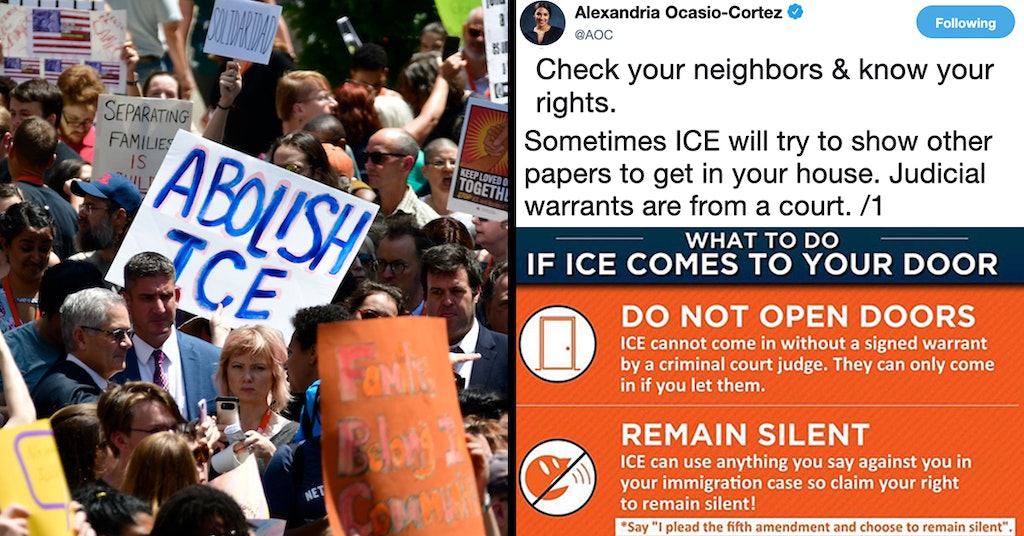 ICE Is Launching Raids Across 10 Major Cities This Sunday. Democrats Want Migrants To Know Their Rights.

On Sunday, plans to arrest thousands of people in various cities across the U.S. will be implement by ICE officials. They will be looking for people issued final removal orders, BuzzFeed reports, and taken to detention centers in Allentown, Texas.

The move was originally threatened in June by President Donald Trump, but was cancelled when agents expressed concern over the potential damage to families. According to sources inside, nothing has been done to address those concerns and ICE has not coordinated with child welfare officials for Sunday.

Original concerns indicated that officials were unsure how to “arrest a baby,” which could certainly come up if parents were being arrested. One lawyer weighed in on Twitter about how such a thing would be possible:

So, here's how you arrest a baby:

1) Arrest the baby's parents or declare them unfit.
2) Baby is now an unaccompanied minor.
3) The government can hold the baby forever.
4) Parents pray they can show a Mathews v. Eldridge procedural due process violation to get their baby back. pic.twitter.com/uwKBIPDelf

Undeniably, the raids Sunday will break up families, separating some children from their parents forever. And understandably, protests have erupted in cities targeted for raids.

Democrats seem to be powerless to stop the plans, but many of them have shared advice on the rights of immigrants and the limitations of ICE when it comes to arrests, including Hillary Clinton and Alexandria Ocasio-Cortez.

ICE cannot enter a household without a warrant. Migrants are also advised to remain silent if questioned, to not sign any paperwork, to record every encounter, and to seek legal representation whenever possible.

No matter who you are or what your status is, this is the United States of America – where ALL people have rights. Know yours.

Prepare. Visit https://t.co/vneVYPCAY8 to learn how to handle this & other ICE encounters in multiple languages. pic.twitter.com/yDcKTzn8fq

If people come knocking, you do NOT have to open your door unless there is a signed judicial warrant.

Check the site above to learn how to handle your rights in 4 scenarios in 7 different languages.pic.twitter.com/PtH8Ngki55

We have to show up for our immigrant neighbors & family. Please SHARE & RT this list of ICE raid resources far and wide so people can know their rights!https://t.co/4PViCSH7QW

On Thursday, Nancy Pelosi also shared relevant info, saying, “An ICE deportation warrant is not the same as a search warrant. If that is the only document ICE brings to a home raid, ICE does not have a legal right to enter a home.”

The raids will be devastating to people taken into detainment, but the fear-mongering around the raids have their own collateral. Check your resources, know your rights, and share verified information. Even if you personally don’t fear arrest, you might have the knowledge necessary to protect someone who does.