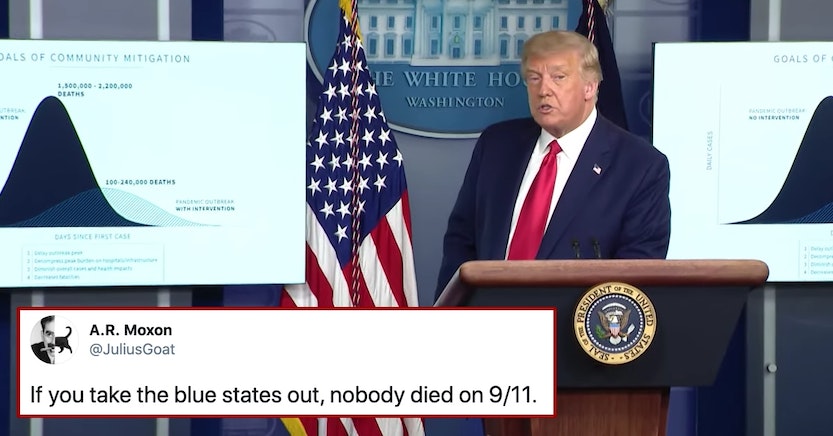 President Trump has made it pretty clear that the only interest he has in states that primarily vote for Democrats is when he can send federal agents in to police and attack them and subsequently point to them as reasons why the Democrats are failing.

But in case there was still any question, the president yet again made a point to divide his constituents between “red” and “blue” on Wednesday, claiming that the United States would be doing much better with COVID-19 if you ignored all the stats from blue states.

“The blue states had tremendous death rates,” he said. “If you take the blue states out, we’re at a level that I don’t think anybody in the world would be at, we’re really at a very low level.”

As usual, the facts don’t support Trump’s outrageous claims. The entirety of the U.S. has seen nearly 200,000 deaths from COVID-19 since the start of the pandemic, and while early numbers were higher in places like New York and New Jersey, which voted for Hillary Clinton in 2016, that just isn’t the case anymore.

Once we were no longer blindsided by the pandemic (that Trump knew was coming and did nothing to prepare us for), Republican-leaning states have risen in death rates while Democratic states have dropped, leaving the percentages of overall deaths nearly even.

According to The Washington Post, that means that red states have seen more than 90,000 deaths from COVID-19, which would simply put us in second place for most deaths instead of first.

Aside from being factually inaccurate, Trump’s attempt to shift the blame off of himself and his party and to this false idea of failed Democratic leadership is pure divisiveness and, as many are saying, un-American and unpresidential.

And some have pointed out that if this is the standard by which Trump wants to judge COVID-19 deaths, then maybe he should try applying it to everything else as well.

It also bears repeating that Washington insiders have said that Trump and son-in-law Jared Kushner purposely neglected to implement any sort of federal response plan for COVID-19 because they believed it would mainly affect blue states.

And considering we now know, from Trump’s own words, that he knew how dangerous the virus was early on and purposely downplayed it to Americans, nothing about that claim seems unbelievable. The only thing that’s unbelievable is that this guy, somehow, is still responsible for leading the country.

And yes, that means the entire country, Donald.