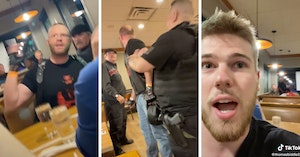 A video of a customer throwing a hissy fit at an IHOP went viral on TikTok in the past couple of days.

The video was posted by TikTokker Thomas (@thomasbiddle24), who managed to film the tail end of the raucous incident, which seemed to have been instigated by the customer himself complaining about slow service in the understaffed IHOP restaurant.

Thomas didn’t share the location of the IHOP, though some reports seem to think that it was located in Fort Wayne, Indiana.

In the video, a waitress can be heard saying, “There are three servers on, sir. We can only do so much. If you don’t like it, you can go somewhere else.”

The customer takes offense to that and argues with the woman back and forth before saying that he won’t “f-cking pay for a meal.”

The waitress has had enough with the man at this point in the interaction and says simply, “Well then, bye, you’re out.”

This doesn’t seem to be the response the customer was hoping for, and he vents out his frustration by shattering a class on the floor while getting up to leave.

The broken glass is scattered over to other customers, though, and one older customer, identified as Dale, stands and shouts, “Hey, you son of a b-tch! You about put that right in my eye!”

The rude customer doesn’t care and screams back at him, “That’s not my fucking problem!”

Fortunately, a police officer or security guard (it’s unclear in his quick appearance) named Paulo was on hand to swiftly remove the troublemaker from the IHOP after checking in on Dale to make sure he was okay.

The officer asks, “Dale! Are you hurt?”

Thomas posted a follow-up video to the viral altercation to let the folks of TikTok know that the server and Dale were uninjured, though there was no mention of the person in orange whose feet were near the smashed glass.

Comments on the viral video showed an outpouring of support for all those involved in the altercation.

One user said, “Nobody hurts DALE THE REGULAR and gets away with it.”

“That server slayed,” another added.

A third noted the impressive speed of the officer’s response. “Fastest response time I’ve ever seen by a cop.”

Other users commenting on the video noted that the whole restaurant came together after the unruly man was removed from the premises.

“Nothing brings strangers together like some good public drama,” one commenter noted.

Another joked, “All of a sudden the whole restaurant is having dinner together.”

“I love how everyone starting talking like they was in a class together,” another user said.