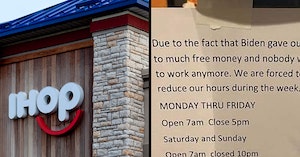 An Arkansas IHOP is facing backlash after posting a sign complaining about a lack of workers and blaming President Biden in the process.

“Due to the fact that Biden gave out way to [sic] much free money and nobody wants to work anymore. We are forced to reduce our hours during the week,” reads a printout allegedly photographed at and signed by a local IHOP.

Companies that refuse to pay their workers well have bemoaned the state of the service industry over the last few months, blaming unemployment and stimulus checks for making people “lazy” — as if $1200 really stretches that far and unemployment lasts forever. Many folks who were collecting unemployment at the start of the pandemic would have run out by now, and the extra federal pandemic unemployment benefits ended earlier this year.

On top of that, Congress voted on the majority of the money that went out to help struggling Americans who were let go by companies cutting corners to keep their profit margins as high as possible during the early days of the pandemic while Donald Trump was still president.

But who needs facts? Not IHOP, apparently. If they did, they would look to the greater trends in employment (such as how unemployment has actually fallen considerably this year) and wonder what they’re doing wrong if they can’t keep employees.

Conservatives who don’t believe in living wages, of course, expressed their support for IHOP. They love capitalism but not when it negatively impacts corporations and power is held by the workers who refuse to accept low wages. Go figure.

All-in-all, the internet trending #BoycottIHOP on Twitter isn’t likely to make a big dent in the store’s decision, but failing to find and retain qualified staff might make them have to rethink their policy at some point.

In the meantime, IHOP corporate has yet to respond.