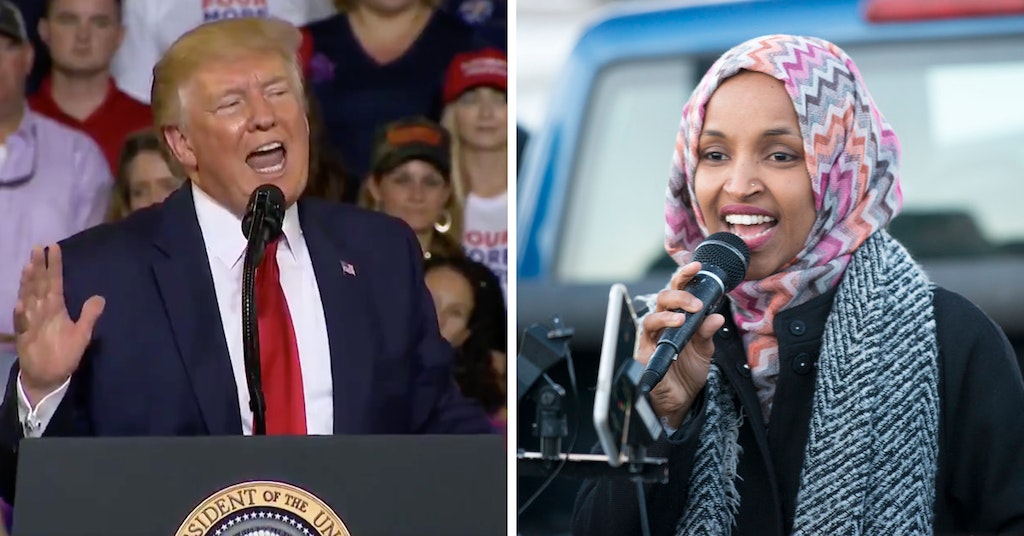 President Trump held a rally in Greenville, North Carolina last night during which he repeated his attacks against Rep. Ilhan Omar, reading excerpted quotes and falsely claiming she was supportive of Al Qaeda. Trump previously amplified the false right-wing smear that Omar had married her brother.

“These left-wing ideologues see our country as a force for evil,” Trump said referencing Reps. Ilhan Omar, Alexandria Ocasio-Cortez, Rashida Tlaib, and Ayanna Pressley. “Rep. Omar blamed the United States for the terrorist attacks on our country,” he said citing no evidence.

Pres. Trump continued his now days-long attack on four Democratic congresswomen at his rally in North Carolina on Wednesday night, eliciting chants of "send her back" from the crowd. https://t.co/V9Nf9ve5tf pic.twitter.com/OSf6hkEu4E

People on Twitter were horrified and disgusted at the angry mob of Trump fans demanding the president send a sitting congresswoman back to Somalia, a country she hasn’t called home since age 8.

The crowd at Trump’s rally chanting “send her back” after the President viciously and dishonestly attacked Ilhan Omar is one of the most chilling and horrifying things I’ve ever seen in politics.

.@realDonaldTrump & @GOP enablers have legitimized the racist chant of "send her back" to an American citizen. If @IlhanMN was white they would not use that racist trope.

If this horrifies you then vote, donate & organize like never before. The soul of our country is at stake. https://t.co/ZeYVX0HqAJ

The hashtag #IStandWithIlhan started trending and Omar received an outpouring of support in the face of the racist attacks from the president and MAGA nation.

#IStandWithIlhan and am proud to work with her in Congress.

Trump is stoking the most despicable and disturbing currents in our society. And that very hatred and racism fuels him. We must fight together to defeat the most dangerous president in the history of our country.

This is not cute, witty, or benign. This is malignant, dangerous, violent, white supremacist hatred targeting a sitting member of Congress, @IlhanMN, a Black woman, a Muslim. This vitriolic racist, antipathy puts her life in danger.#IStandWithIlhan #RacistPresident pic.twitter.com/Jk5X8uDOhC

My message to the folks who chanted “Send her back” last night:@realDonaldTrump is in court trying to take away your health care. He broke his promise to bring jobs back. And he’s making a ton of money off of his presidency. #IStandWithIlhan

.@IlhanMN’s courage is extraordinary. It is beyond comprehension how much of the fight for equality has fallen on this one woman’s shoulders as she continues to fight for her right to a voice. Unequivocally: #IStandWithIlhan

Today, Omar took the high road and indicated she would not allow the attacks to distract her from doing her job:

“What I’m going to be busy doing is uplifting people and making sure that they understand here in this country we are all Americans, we are all welcome regardless of what he says.”

Prior to last night’s rally, Trump and his defenders in Congress were attempting to characterize his racist “go back to your country” tweets against “The Squad” as merely non-racist pushback against those deemed too critical of America.

Democrat leaders in the House may be afraid of their “socialist squad,” but GOP isn’t.

We know America is the greatest, strongest, most free nation in the history of the world.

We will never stop fighting the communist wing of the Dem party. #Freedom #GodBlessAmerica

Our Country is Free, Beautiful and Very Successful. If you hate our Country, or if you are not happy here, you can leave!

But it seems Trump’s supporters understand exactly what he meant by those tweets—that these women of color are insufficiently American and unwelcome in United States.