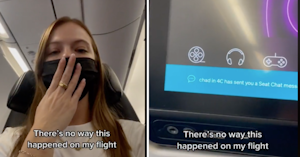 A TikToker posted a video of a message she received from a man via her plane’s seat screen — which is a thing I had no idea was possible, but I also haven’t been on a plane in a very long time.

Georgia-May Davis, who goes by @georgiamaydavis on the app, wrote “There’s no way this happened on my flight” in the text overlay.

The clip features Davis showing messages from a fellow passenger whose name is “Chad” and who is sitting in Seat 4C.

The first message he sent to the seat screen is, “How are you?”

I mean, on an airplane so probably cranky. But then Davis says the texts ramped up.

“Where u stayin?” he wrote in the next message. Davis looks shocked as she replies, “What?”

“I tryna hit,” he responds. After that, she blocks him.

On TikTok, viewers had questions. Like, what airline does this? (OK, I am glad to know I’m not that behind the times.) Apparently it’s Air New Zealand, according to Davis.

Others accused Davis of faking the video. She told TikTokers that the incident was real: “My ex-boyfriend was called ‘Chad’ so trust me when I say it wasn’t,” she wrote in a comment.

“You can’t make this stuff up.”