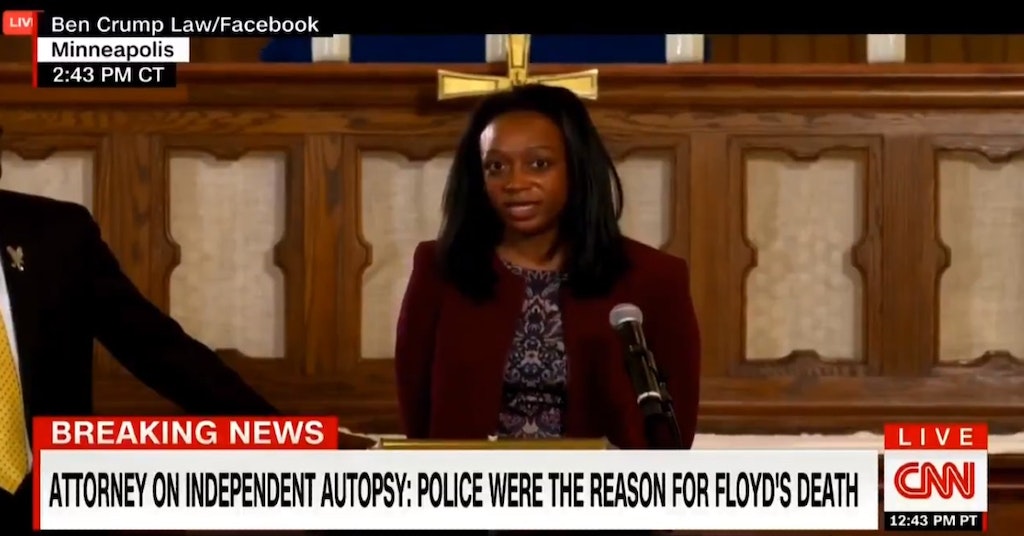 After the Hennepin County Medical Examiner denied that George Floyd died because former police officer Derek Chauvin was kneeling on his neck for several minutes, an independent autopsy found the opposite, declaring the death to be a homicide. Specifically, they found that Floyd died by asphyxia due to neck compression, which in simple terms means he died because Chauvin cut off the flow of oxygen-carrying blood to his brain.

According to Allecia Wilson, director of autopsy and forensic pathology at the University of Michigan and the individual who conducted the independent autopsy, her examination determined “mechanical asphyxia as the cause of death and homicide as the manner of death.”

“Second autopsies do have their limitations as we are not seeing the tissues in their original state, but with that acknowledgment, we feel those items will not change or alter the primary cause of death was mechanical asphyxia,” she added.

Floyd family attorney Benjamin Crump and co-counsel Antonio Romanucci have also noted that the other officers who knelt on Floyd’s back likely also cut off airflow to his lungs, contributing to the asphyxia that eventually stopped his heart.

“He would be alive today if not for the pressure applied to his neck by fired office Derek Chauvin and the strain on his body from the two additional officers kneeing him in his back,” said Crump at a press conference following the new autopsy results. The other officers on the scene while George Floyd died have not been arrested or charged.

FLOYD INDEPENDENT AUTOPSY FINDINGS RELEASED: Attorneys for the family of George Floyd hold a news conference on the preliminary findings of an independent autopsy of Floyd’s body. https://t.co/jsFZa4UxB7

Crump is now calling for the murder charges against Chauvin to be upgraded from third-degree to first-degree.

The independent autopsy also found no evidence of “underlying health conditions,” again directly contradicting the Minneapolis county’s preliminary report that Floyd’s death was likely due to heart disease and even unconfirmed “potential intoxicants” in his system.

According to TMZ however, the Hennepin County Medical Examiner released official toxicology findings hours after the independent autopsy ordered by the family members of George Floyd was released.

The Hennepin County Medical Examiner’s office contradicts the report, alleging that Floyd suffered “a cardiopulmonary arrest while being restrained by law enforcement” and that he had fentanyl in his system as well as signs of recent methamphetamine use—though it does admit his manner of death was homicide.

The news of the new autopsy has resulted in widespread renewed calls for justice.

Per the Floyd family’s legal team, the independent autopsy also found that compression on George Floyd’s back — not only his neck — contributed to his death.

So the other officers who helped pin him down restricted his airway further, leading to his death.

So the #GeorgeFlyod independent autopsy shows that George death was actually cause my strangulation….
???? which means the police lied. pic.twitter.com/UN4gWDRe3O

Independent autopsy confirms what we all knew. #GeorgeFloyd was murdered and the system will fucking burn pic.twitter.com/NelSGuqqx4

2 pathologists’ independent autopsy finds #GeorgeFloyd died due to asphyxia from neck and back compression that led to lack of blood flow to the brain.

All these thousands of arrests couldve been avoided if they had just arrested the 4 officers.

Compare and contrast that to the state autopsy which, curiously, found no such evidence while implying (without any evidence offered) that “intoxicants” may have played a role.

How the Hannepin County Medical Examiner thought that would fly is beyond me.

An independent autopsy was performed on George Floyd's body, and guess what?

GEORGE FLOYD'S FAMILY ASKED FOR AN INDEPENDENT AUTOPSY AND IT WAS CONCLUDED THAT THE DEATH "WAS HOMICIDE CAUSED BY ASPHYXIA DUE TO NECK AND BACK COMPRESSION THAT LED TO A LACK OF BLOOD FLOW TO THE BRAIN." SPEAD THIS PLEASE LET THEM KNOW THEY CANT GET AWAY WITH THIS ANYMORE

The medical examiner who released the first autopsy results should be fired and an independent investigation should be completed to see if they have helped cover up homicides. https://t.co/bVAcNtYSQc