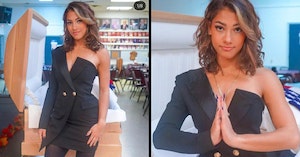 An Instagram influencer is facing off with the haters after she received a wave of criticism for posing in front of her father’s open casket for the ‘gram.

Jayne Rivera’s father, Jose, reportedly died earlier this month at the age of 56. The 20-year-old influencer paid tribute to him on her social media, writing: “Butterfly fly away. Rip Papi you were my bestfriend. A life well lived.”

She also shared photos that left some folks feeling uncomfortable with the whole situation.

It isn’t necessarily uncommon to take photos with a casket, as some folks have pointed out, but it may have been the way Rivera posed — as if she were just in front of a pretty mural or showing off her outfit of the day — that didn’t sit well with people.

Some just really piled on.

But others were more frustrated with people judging the way someone else grieves, and suggested everyone just lay off.

As for Rivera, she defended her photos to NBC News, saying she wanted to let her followers know that her father, who had been in some of her content, had died.

“Everyone handles the loss of a loved one in their own ways; some are more traditional while others might come across as taboo,” she said. “I have worked extremely hard for eight long years building my audience. People from the outside judge a book by its cover without stopping to understand the intentions of underlying meanings of the book.”