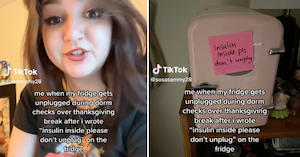 College Student Says Someone Unplugged Her Insulin Fridge And Now She Has To Trash $4,000 Worth

In a TikTok video, a college student says that her personal refrigerator in her dorm room was unplugged during holiday break — despite the fact that she had a note on it saying that she had insulin inside.

In the video, Samantha (@sosammy28) explains she left a note on the refrigerator door that read: “Insulin inside please don’t unplug.”

Well, someone unplugged the fridge.

“Love the warm, unrefrigerated insulin I came back to,” she wrote in the video caption. “On a serious note, this is not OK.”

Samantha told her dad about the situation, and he called the resident director of the school.

“All the [resident director] said was that it was a careless mistake, and that I should’ve taken my insulin home with me,” Samantha says.

Insulin needs to be stored in a refrigerator at around 36°F to 46°F to remain efficacious, according to the U.S. Food & Drug Administration. If unopened insulin vials are left unrefrigerated for up to four weeks, they should be discarded within two weeks.

Samantha added later in a comment that she school had told her that fridges didn’t have to be unplugged during breaks.

“This is why I have a problem, especially since I wrote that note.”

Samantha made a follow-up video to address some of the questions. She says she had 27 vials of insulin (over $4,000 worth) and that her doctor told her to toss all of it after a month.

“Contact your office of accessibility!” advised one follower. “This is also an ADA issue.”

Samantha added that she is meeting with her school’s head of resident life soon. It’s unclear if the school will reimburse her, but we sure hope they do!