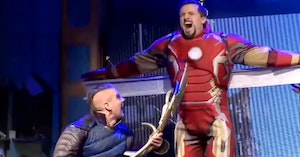 Every time we think Christianity can’t get any more detached from reality, someone crucifies a Tubthumpin’ Iron Man on Easter Sunday.

While Christian churches across the board seem to love denouncing every facet of the entertainment industry as pawns of Satan meant to bring the world to its knees, that’s rarely stopped some of them from trying to snatch up what they can from popular culture and repurpose it in the deeply bizarre name of Christ.

For one church in Winnipeg, Manitoba, that appears to involve putting on yearly Easter productions that reimagine the crucifixion using characters from blockbuster movies, like Avengers: Endgame.

This atrocity started circulating on social media last week, although it actually stems from a 2019 Easter production from Church of the Rock, who has reportedly similarly twisted secular films such as Back to the Future and The Lion King.

While these may look straight up like Saturday Night Live parodies of Christianity’s attempt to find relevancy in a modern world, they are, in fact, real. And really disturbing.

You can watch a slightly longer version of Iron Man’s crucifixion here, and all the other crucifixions this church has done here, if that’s the kind of thing you’re into.