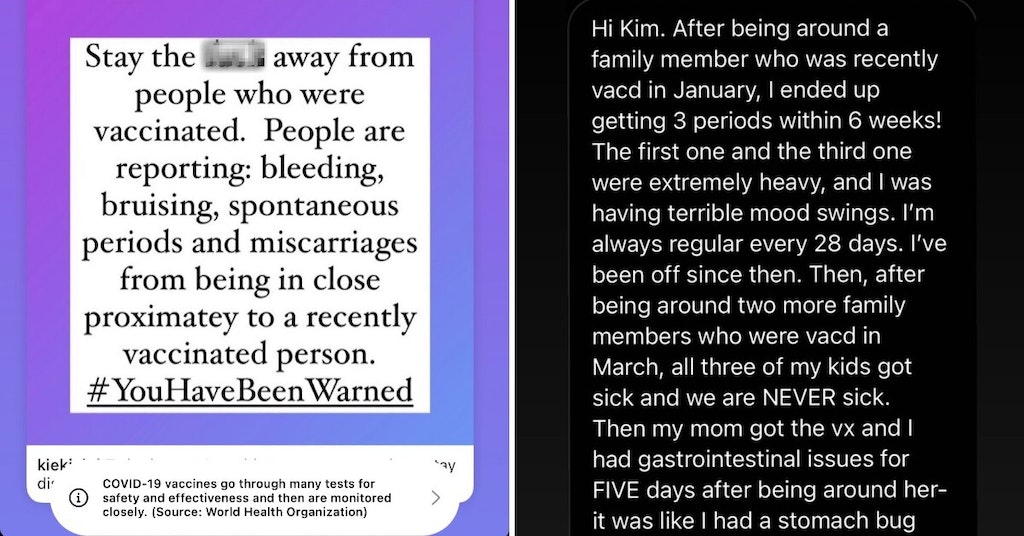 No, You Can’t Get Irregular Periods From Being Around COVID-Vaccinated People


As the COVID-19 vaccine has become more widely available to the public in the U.S., some have been reporting that their menstrual cycles seemed to be affected by the shot, reporting irregular and unusually heavy periods after getting theirs.

Social media accounts began spreading warnings to those who menstruate to prepare for potentially getting multiple periods in the space of a month or to make sure they have a good supply of period products ready in case it’s super heavy.

While it seems possible that a new vaccine could affect menstruation after it’s received, certain social media “influencers” have unfortunately taken it a step further by trying to claim that their periods became more frequent and heavy just by being around people who had received the COVID-19 vaccine.

Mother Jones found other posts by well-known anti-vaxxers and COVID-deniers sharing comments claiming exactly this, with one woman even blaming her miscarriage on the fact that she had been near a vaccinated person.

“I am so heartbroken, I never put two and two together,” said one individual to anti-vaxxer Kim Alberts. “The day after we got back from a trip last month, I started bleeding heavily. 3 days later I miscarried at 10 weeks. I had so many clots that I had to go to the hospital, soaking pads every 20 minutes.”

“I am not [vaccinated] and never will be, but after being in such close proximity to all those people on the plane I’m wondering what I could have been exposed to.”

Unfortunately for this person, what’s much more likely that her getting second-hand vaccine vapor was that she was exposed to the novel coronavirus on the plane, which is known to cause blood clots.

Dr. Naomi Wolf, feminist icon turned anti-vaccine conspiracy theorist, also amplified these rumors to her many thousands of fans in a recent tweet claiming that somehow the mRNA vaccine can “transmit passively via respiration.”

The article linked merely suggests that passive vaccination of the public via some sort of vaccine that can be inhaled should be looked into, noting that “there are no conclusive or ongoing large scale clinical studies yet to prove the above hypothesis,” not that vaccinated people can pass on their vaccination to others by breathing.

While there were no reports of menstrual irregularity from any of the vaccine trials, Mother Jones reports that OB/GYN Dr. Jen Gunter did some research and outlined a number of potential explanations for this phenomenon—including the fact that the lining of the uterus is affected by the immune system and that stress also contributes to period irregularity.

She cannot say for sure what is causing the seeming increase in menstrual irregularity after initially being vaccinated against COVID-19 and argues that the lack of research into the vaccine and other medicine’s effects on menstruation is a problem.

“The lack of data regarding menstrual cycles and vaccines is infuriating.,” she wrote. “I am not concerned about downstream effects regarding infertility or recurrent miscarriages as this has been well-studied for a variety of vaccines. But knowing about menstrual irregularity is as important as knowing about fever.”