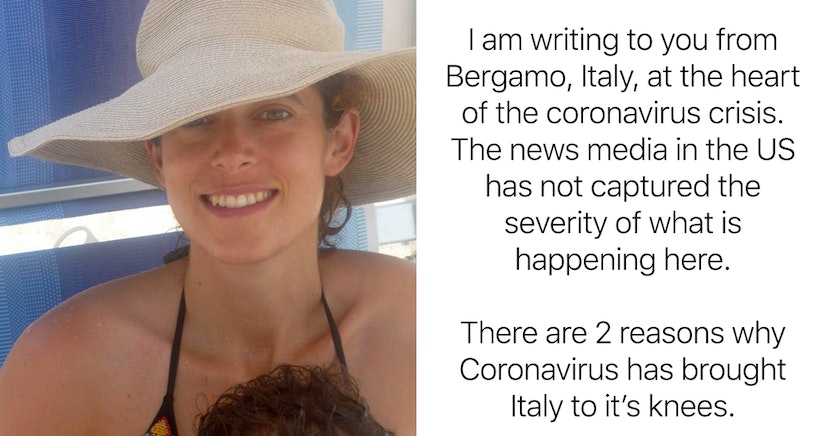 A woman in Italy is sharing her experience with how coronavirus became such a problem that the entire country wound up quarantined, in hopes that people in the United States will take the necessary measures to avoid seeing that happen.

“I am writing to you from Bergamo, Italy, at the heart of the coronavirus crisis,” Cristina Higgins writes. “The news media in the US has not captured the severity of what is happening here. I am writing this post because each of you, today, not the government, not the school district, not the mayor, each individual citizen has the chance, today to take actions that will deter the Italian situation from becoming your own country’s reality.”

I am writing to you from Bergamo, Italy, at the heart of the coronavirus crisis. The news media in the US has not...

She warns that the rest of Europe and the US are only weeks away from the scenario in Italy.

Many people are treating coronavirus as just a slightly different version of the flu, something that most of the population only sees as a minor inconvenience.

Just read something similar in an email from three U of Oregon professsors in Italy. It’s not just Trump who is failing right now, it’s all of our political leaders. In four weeks we are going to wish we had acted very differently right now.

But Higgins points out the reasons coronavirus is so much worse, even if most people are unlikely to die from it.

“First it is a flu [that] is devastating when people get really sick they need weeks of ICU — and second, because of how fast and effectively it spreads,” she writes. “There is a 2 week incubation period and many who have it never show symptoms.

“When Prime Minister Conte announced last night that the entire country, 60 million people, would go on lock down, the line that struck me most was ‘there is no more time.’ Because to be clear, this national lock down is a hail mary. What he means is that if the numbers of contagion do not start to go down, the system, Italy, will collapse.”

Cases of coronavirus have flooded the hospitals, putting them overcapacity and leaving patients without necessary and life-saving care.

Not only are doctors having to choose who lives and who dies due to overcrowding, she says, but the medical staff themselves are becoming infected with the virus, leading to less carers for a system already stretched so thin.

“If the numbers do not go down, the growth rate of the contagion tells us that there will be thousands of people who in a matter of a week? two weeks? who will need care. What will happen when there are 100, or 1000 people who need the hospital and only a few ICU places left?” Higgins asks.

She also says this isn’t just impacting the elderly, as many seem to believe.

“And finally for those who say that this is just something that happens to old people, starting yesterday the hospitals are reporting that younger and younger patients — 40, 45, 18, are coming in for treatment.”

Coronavirus seems more likely to be fatal in older and immunocompromised people, but that isn’t the full story. Younger people who ultimately survive can still spend weeks in the hospital recovering, and can certainly contribute to the rapid spread of the disease.

Here's a video interview with a senior Dr on the ground in Italy that tracks with that. What's a worry is he references a patient as young as 20 being intubated. Talks about the measures required to avoid the same problem. https://t.co/hfhL3Ft6eR

Higgins’ plea to stop the spread of the virus before it’s too late comes with specific steps that can be taken to protect communities.

“You have a chance to make a difference and stop the spread in your country,” she writes. “Push for the entire office to work at home today, cancel birthday parties, and other gatherings, stay home as much as you can. If you have a fever, any fever, stay home.

“Push for school closures, now. Anything you can do to stop the spread, because it is spreading in your communities — there is a two week incubation period — and if you do these things now you can buy your medical system time.

“And for those who say it is not possible to close the schools, and do all these other things, locking down Italy was beyond anyone’s imagination a week ago.

“Soon you will not have a choice, so do what you can now.”