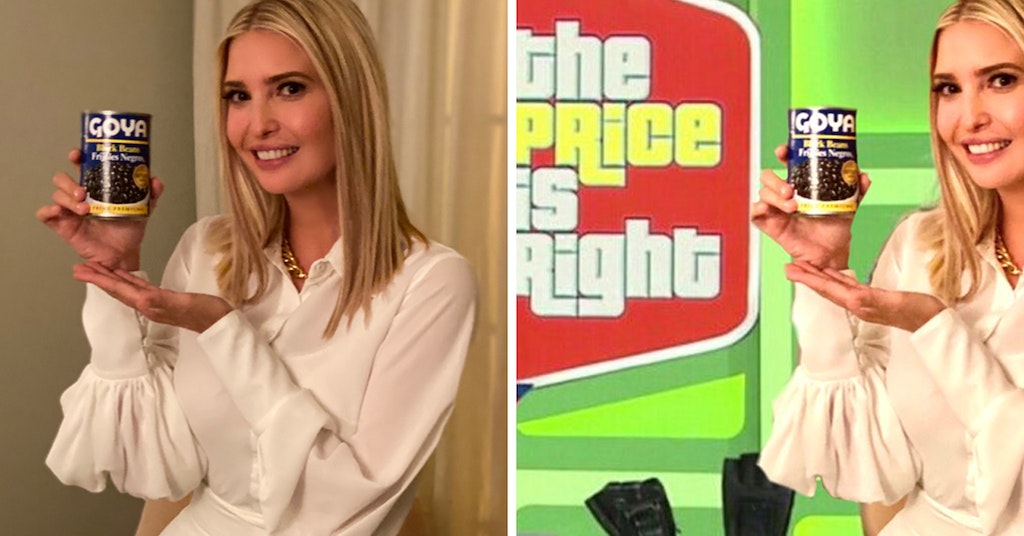 In the picture, Ivanka poses like a game show assistant, her teeth impossibly bright and her blonde hair glossy. She wears all white, the picture of American Purity, while holding a can of Goya beans. The beans that we all stocked up on during the beginning of the pandemic her father did nothing to manage. The beans that many Latino families use in their cooking, that were somehow safe from the racist paws of President Trump and his ilk until the other day.

The viral photo uses Goya’s own tagline, which almost certainly violates federal ethics regulations. The President—as well as his advisors—are not supposed to use their position to promote a product. But we all know that such rules don’t apply to the Trump family, whose entire enterprise in the White House has been one big, deadly product placement.

The White House even announced that it stands behind Ivanka’s bean image: “Only the media and the cancel culture movement would criticize Ivanka for showing her personal support for a company that has been unfairly mocked, boycotted and ridiculed for supporting this administration—one that has consistently fought for and delivered for the Hispanic community. Ivanka is proud of this strong, Hispanic-owned business with deep roots in the U.S. and has every right to express her personal support,” said Caroline Hurley.

I could write an entire essay on this stupid image, but I don’t want to give it any more of my intellectual time.

So, let’s get to the Goya beans memes and Twitter rebukes.