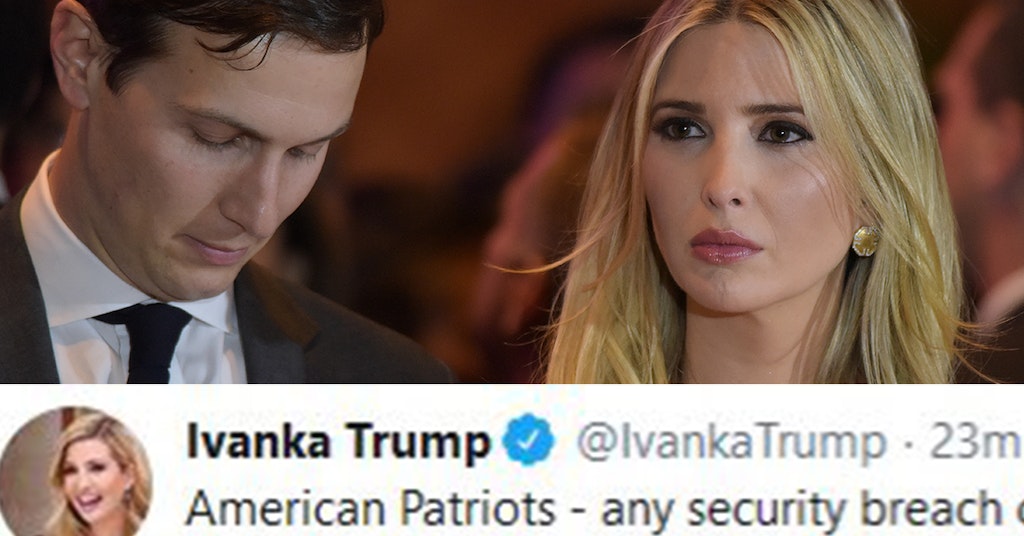 
Most Republican politicians denounced the domestic terrorist attack on the Capitol Building on Wednesday, with the exception of some extreme rightwingers who insisted “Antifa” was behind the attack — in which case they still denounced the attack itself, but wrongly placed the blame on the far left instead of on the Trump supporters who were actually responsible.

But the Trump, to no one’s surprise, failed to do this.

Not only did President Trump release a video telling those storming the Capitol that he loves them and that they are special — a video so controversial that it was removed from Twitter, Facebook, and YouTube for fear of inciting more violence — but his daughter, Ivanka Trump, called the terrorists “American Patriots.”

“American Patriots - any security breach or disrespect to our law enforcement is unacceptable,” she wrote in a since-deleted tweet. “The violence must stop immediately. Please be peaceful.”

While there is technically a call for violence to end, the statement reeks of the same sentimentality and coddling that was present in Trump’s video. In no other scenario would Ivanka, any other Trump, or any other Republican, have referred to a violent mob storming the Capitol to threaten members of Congress and vandalize property as “American Patriots.”

Ivanka deleted her tweet after she was essentially asked to repeat what she wrote.

And the president’s daughter backtracked: “No. Peaceful protest is patriotic. Violence is unacceptable and must be condemned in the strongest terms.”

However, the fact remains that her knee-jerk reaction to dealing with literal terrorists attacking a federal building was to continue stroking their egos the same way her father and her whole family have always done to retain their support.

If you’re Black and want freedom from police brutality, you’re a thug. But if you’re white and voted for Trump and punch police, you’re a patriot — momentarily misguided, maybe, but a patriot nonetheless.

Though perhaps part of the reluctance to slam this violent mob and call them what they are is due to the possibility that the Trump family would then be one step closer to having to acknowledge their own complicity in pushing our country to this boiling point.

Ivanka has not tweeted again since “correcting” herself, and it’s hard to imagine what she could possibly think is appropriate to say next.