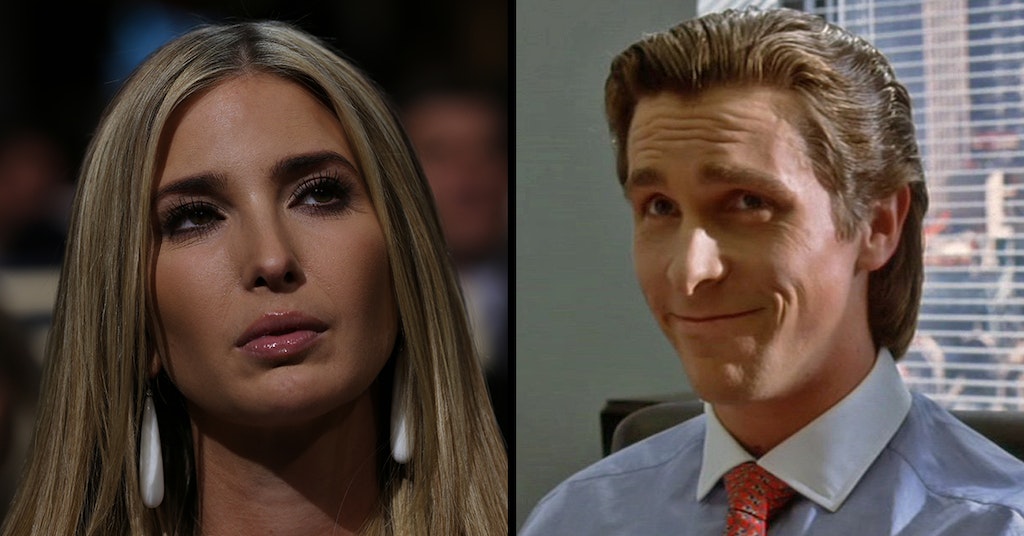 Whomst among us hasn’t crushed over a sexy rebel? Whether it’s James Dean in Rebel Without a Cause with a leather jacket slung around his jacket, or Regina George wearing pink on a Wednesday in Mean Girls, there’s something hot about a rule-breaker.

But Ivanka Trump once took a harmless bad boy crush to a seriously questionable level. Her lust object of choice? Patrick Bateman, as played by actor Christian Bale in American Psycho (2000).

Reporter Vanessa Grigoriadis profiled Trump in a new essay and podcast series, which shines a light on the president’s inscrutable daughter. In it, Grigoriadis reported that in her 20s, Trump “fantasized” about Patrick Bateman and called him her “ideal man,” writing that the Bateman character represents “an ’80s scenester just like her father [Donald Trump] was back then — suspenders, slicked-back hair, chops up women for a hobby.”

That’s a nice way of describing Bateman. The fictional invention of writer Bret Easton Ellis, Bateman is a slick, rich psychopath, who devolves into homicidal delusions, and takes particular joy in torturing and murdering sex workers.

Bateman hates women, craves superiority, and has exactly zero feelings. Sound like anyone you know?

Grigoriadis noticed eerie similarities between Bateman and Trump’s husband, real estate mogul Jared Kushner. “Handsome when you first look at him,” she writes, “but upon contemplation, his face is a Cubist construction. The eyes seem to refract rather than reflect light, and he has an unpleasant cast to his mouth; what he’s turning over in his mind seems to be expressed less through words than through the railroad-straight set of his lips.”

We’re no mental health professional, but it doesn’t take a rocket scientist to note that Trump’s crush on Bateman is the logical conclusion of begin raised by a philandering Cheeto. Looks like Trump married her dream man after all.