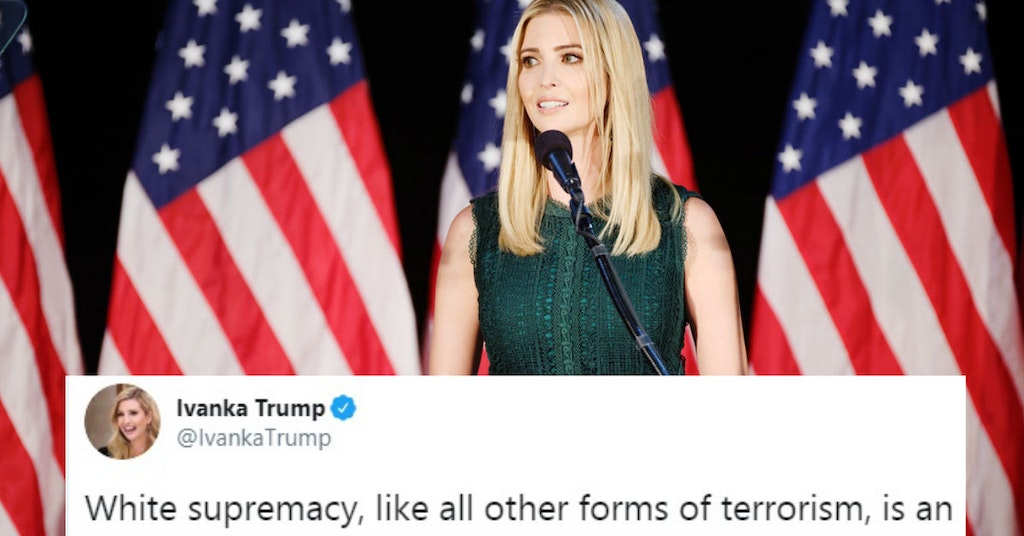 Ivanka Trump might win the award for stupidest response to the mass shootings in El Paso and Dayton over the weekend. It was bad enough to evoke the old “thoughts and prayers” response, but her callout of white supremacy rings extremely hollow considering who her father is.

White supremacy, like all other forms of terrorism, is an evil that must be destroyed.

“As our nation mourns the senseless loss of life in El Paso, Texas and Dayton, Ohio and prays for the victims and their loved ones, we must also raise our voices in rejection of these heinous and cowardly acts of hate, terror and violence,” Ivanka tweeted. “White supremacy, like all other forms of terrorism, is an evil that must be destroyed.”

So, uh, how and when will Ivanka be destroying the President?

Donald Trump has been widely blamed for the increase in white supremacist terrorism that has been on the rise since his campaign took off just before the 2016 presidential election. The El Paso shooter in particular named Trump as an inspiration for his actions.

In spite of occasionally condemning things like racism and bullying, Ivanka has defended her dad and any mention of his role in firing up white nationalists or echoing their rhetoric is loudly absent from her tweets today. People have noticed.

Here are some of the best responses to Ivanka Trump’s “white supremacy” statement:

Your prayers aren't working. Try checking your dad on his tweets. 251 mass shootings in the U.S. in 216 days.

He incites violence every day w/ his hate agenda & racism. More people are dying b/c he fails to fight white supremacist terrorists.

They are the ones who hate America. https://t.co/dYzF2G7fEa

Absolutely Ivanka,…. Oh, If only someone had access to the President, and the guts to tell HIM this…..OH WAIT!…

Ivanka, There came a time when, for ethical reasons, the endurance of the nation and the common good, you needed to stop supporting your father’s discourse and decisions. That time has long passed

Are you punking us right now?

I gagged that Ivanka denounced white supremacy publically but also- the political motivations and actions of this administration don't denounce or destroy white supremacy- in fact it rejoices in it- in action. https://t.co/9CnGgP29qG

Maybe bring it up at dinner or something?

So destroy yr father or shut up – RT @rezaaslan: Fuck you Ivanka. Seriously. Fuck you and your entire white supremacist family. https://t.co/9WQLwCwcIT

The terrorism is coming from inside the house…the white one.

When I ask myself, “How callous, irresponsible, and lacking in self-awareness can she be?”—you respond eloquently with a tweet like this, and I know.

Oh boy do I have bad news about your family.

FYI: Your miserable, race-baiting father actually laughed when confronted w/ the idea of shooting immigrants. Nothing you will ever do or say will ever eclipse the fact your father is an unadulterated piece of garbage.

Tell that to your daddy, Ivanka — the #WhiteSupremacistInChief. Until then, give us all a goddamn break.

You don’t raise your voice. You are one of the only people on the planet who is in a position to influence the lunatic sitting in the WH with your opinion, and you say nothing. This cowardly act of violence was inspired by your daddy’s rhetoric of calling immigrants an invasion.

Have you no decency? That was rhetorical.

Here’s your dad yucking it up and promoting his personal business while 20 people lay dead in El Paso and another 10 people were being gunned down in Dayton. We need a #FullTimePresident and one who doesn’t fuel violence. pic.twitter.com/3wf584S99G

Cool, so when are you announcing your estrangement from your father?

You wrote this because you don‘t want to go to hell anytime. But it‘s too late, Ivanka.

Tots and pears for Ivanka’s mentions.