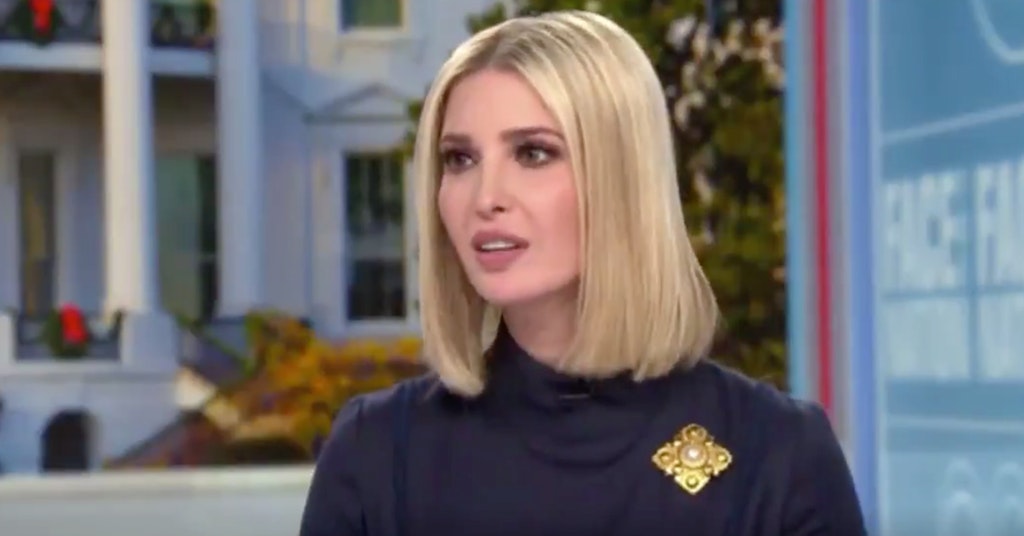 Ivanka Trump is facing criticism on Twitter after stating in an interview on CBS’s Face the Nation that immigration isn’t part of her “portfolio” while generally dodging questions about family separation policies at the U.S.-Mexico border. When host Margaret Brennan brought up her previous objection to the policy and reminded her there are still about 900 migrant children currently separated from their families, Ivanka echoed her dad’s talking points.

“Immigration is not part of my portfolio, obviously,” she said. “I think everyone should be engaged, and the full force of the U.S. government is committed to this effort of border security, to protecting the most vulnerable. That includes those being trafficked across our border, which this president has committed to countering and combating human trafficking in an incredibly comprehensive, aggressive way.”

On @FaceTheNation, Ivanka Trump is asked if she remains engaged on migrant family separations — a policy in her father's administration that she previously criticized.

Trump: "Well, immigration is not part of my portfolio, obviously." https://t.co/97EBRUVcsm pic.twitter.com/fYL1Z1Xt6I

Trump critics quickly took issue with her statement, pointing out that thousands of migrant children have simply been lost by the Department of Homeland Security, resulting in concerns that many of those kids may have been funneled into human trafficking rings. Others were disturbed by the coldness of Ivanka’s response, wondering if there were any human atrocities she could care about without them being in her “portfolio.”

“Immigration is not part of my portfolio, obviously.”

Ivanka said in 2018 that she was “very vehemently against family separation,” but still supported her father’s non-solution to the problem he created: “Don’t come to our country illegally.”

Asylum seekers, who at the time were legally allowed to cross into the U.S. to seek refuge, have also been victims of the family separation policy. Furthermore, in spite of Donald Trump’s supposed order to stop, the ACLU found that his administration was still separating families as recently as late July 2019. So it’s not surprising that many people have zero patience for excuses.

Hey, Ivanka, is being human “part of your portfolio?”

Ivanka Trump: "Immigration is not in my portfolio".
Nor is caring about the torture of separated families.

Stalin: "Prison reform is not in my portfolio."
Nor are humane gulags

Marie Antoinette: "Hunger is not in my portfolio"
So let them eat cake. pic.twitter.com/ILGjFjioRV

If you wonder why Ivanka never spoke up as a 16 year old host of Miss Teen USA as her father lined up teenage girls and ‘inspected’ them. It’s because sexual assault was never part of her portfolio. @realDonaldTrump

Some are also very displeased with Face the Nation for the dubious claim that Ivanka was outspoken against family separation and for giving her a pass on her answer.

Worse part is when @margbrennan asserts that Ivanka was "vocal" in her opposition to Trump's family separation policy.

Ivanka REMAINED SILENT and only expressed opposition, when asked, AFTER Trump rescinded it via executive order pic.twitter.com/NFpUCAJZiy

.@FaceTheNation@IvankaTrump was “vocal” only when she was interviewed and asked directly about it.

She answered she FELT strongly about it.

She was not publicly vocal opposing it as it was being implemented.

No public statement or press release.

That is not vocal opposition pic.twitter.com/YDMo6Rof0s