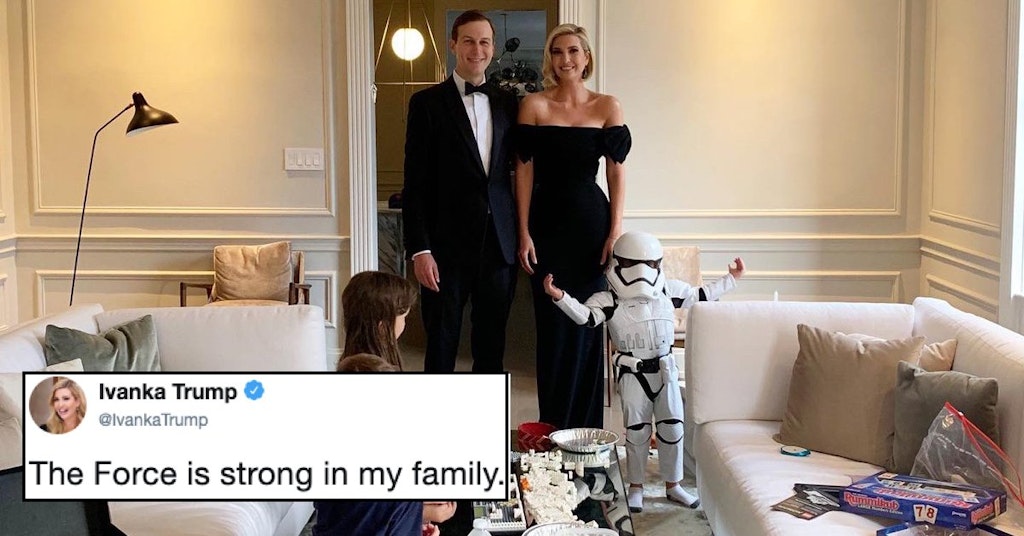 Worlds collide: For once, Star Wars pedants are dragging someone online who deserves it instead of Brie Larson. Ivanka Trump posted a picture of herself all dressed up with Jared Kushner. Her kid is also dressed up—as a Stormtrooper. It’s a very weird little tableau in their creepy living room. He is completely cover. Could be someone else’s kid. Who knows.

She captioned it, inexplicably, with the words, “The Force is strong in my family.”

The Force is strong in my family. ⭐️ pic.twitter.com/oT0jFfy5Lb

Even if her kid and everyone else in the picture were dressed up as Jedi knights, this would be a troll, because the Force is only strong in the Trump family if that’s a euphemism for fascism. You are the regime, honey. The Rebellion would be against you. The Empire is your dad and his White House full of sycophantic Darksiders. I guess it just goes to say that even the worst people in history still see themselves as the heroes in movies. Trump probably thinks he is Han Solo, but with bigger hands.

As it is, this is so spectacularly wrong in every way, it’s almost funny. But people are mostly expressing their rage, including the original Jedi, Luke Skywalker:

Kind of a weird hashtag, but we get what he means.

Getting dragged by Mark Hamill would be enough to send even the most casual Star Wars fan scurrying into a shame hole. The entire Internet soon joined him, however, to further remind Ivanka exactly who the “Force” was for and who the Stormtroopers were. Finally, this information is coming in handy:

"Force"? Doubtful. Your son is dressed as a Stormtrooper, who serve as the Palpatine Empire's shock forces and were originally introduced in Star Wars Episode IV: A New Hope. Originally cloned from bounty hunter Jango Fett… (1/17,313) https://t.co/w4sjsANDfW

Ma’am I don’t mean to split hairs, but storm troopers are on the Dark Side. https://t.co/v6LVNp5fC6

THAT CHILD IS LITERALLY DRESSED AS A STORM TROOPER, ARE YOU SHITTING ME https://t.co/jdDjaYtsiD

This is offensively stupid. He's dressed as a Stormtrooper ffs, so unless you are both outing yourselves as Sith, there are no Force users here. https://t.co/4a5ZvL85dw

Uh, those were the bad guys. https://t.co/nn4PfH5KmV

That's a stormtrooper. They don't use the force. They're just foot soldiers for Nazis.

Which is a bit on the nose, even for you. https://t.co/yMnUycBsSB

Stormtroopers are an allegory for fascism so this is extremely fitting https://t.co/eWxEKykpUy

Fans of the Trumps are saying the online backlash is an attack on the kid for liking Star Wars. It’s not—he can love Star Wars as much as anyone, even if he’s never going to be taught the actual point of the series. Destroy fascist regimes, show love to all, use the Force, which connects all living things, for good.