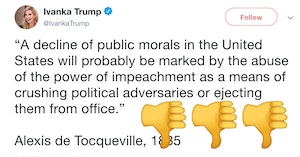 The Trump family knows no boundaries when it comes to spewing nonsense, and Ivanka Trump proved that yesterday when she felt lecturing America about “public morals” was a good idea.

In her trying-to-be-clever anti-impeachment subtweet to America, Ivanka didn’t get the sort of support she was looking for, though. That’s not just because her tweet was totally hypocritical coming from her, but because — shocker! — it’s also a fake quote, one that aimed to shame anyone who thinks impeachment is necessary.

“A decline of public morals in the United States will probably be marked by the abuse of the power of impeachment as a means of crushing political adversaries or ejecting them from office.”

The quote was, not surprisingly, incorrectly attributed to Alexis de Tocqueville, although scholars and historians knew it came from someone else.

According to Newsweek, “De Tocqueville was warning about impeachment being used as a political tool to remove presidents purely on partisan grounds—as the authors of the piece and Hare’s original quote explained. The current impeachment inquiries are investigating whether Donald Trump has breached the country’s laws.”

Ivanka’s incorrectly attributed tweet reflects her father’s tendencies to straight-up make things up. But more so, it makes us wonder what she could possibly know about public morals.

Although people were annoyed that Ivanka didn’t do her research, they were more stuck on the “decline of public morals” part. Twitter, of course, came out in droves to highlight the ways in which morals have been in decline since President Trump got into office.

Your father does not know the meaning of morality.

I know Nepotism Barbie isn't tweeting about the, "decline of public morals!" Oh, wait…her dad did say, "Grab 'em by the p×ssy" in the privacy of a bus! Technically it wasn't in public so… pic.twitter.com/kjk6RwW4cr

"The lack of my father's morals as President of the United States will be displayed by his abuse of power by fighting impeachment and crushing political adversaries by using foreign countries.

The thing is, Trump has been responsible for the decline in public morality.

According to a research study, Understanding White Polarization in the 2016 Vote for President: The Sobering Role of Racism and Sexism, says it all, published at Political Science Quarterly, Trump’s presidency invited (and even encouraged) that lack of public morality.

With his inauguration came a newer, stronger, and louder wave of “anti-immigrant sentiment, racism, and sexism,” according to Brookings. The facts are all there: Hate crimes increased. And racist language flourished.

“He did especially well with white people who express sexist views about women and who deny racism exists,” according to Brookings.

Sounds like Ivanka needs to reevaluate her concerns around public morality.