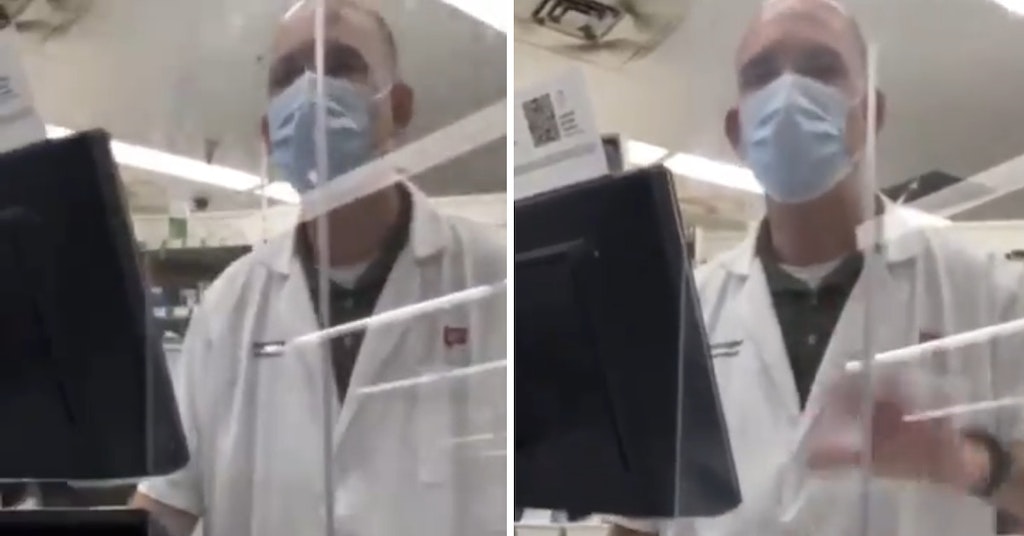 Man Tries To Lie His Way Into An Ivermectin Prescription Fill, Gets Denied By Pharmacist

A video taken by a man while trying to get his ivermectin prescription filled for COVID-19 shows him being denied by the pharmacist, who explains that the pharmacy in which he is employed will not fill such prescriptions for COVID as it hasn’t been approved by the FDA for this purpose. The man filming tries to argue his way into getting his ivermectin, a medication typically used for treating parasites in livestock and in some extreme cases has been approved for human use, but the pharmacist knows the law and will not budge.

He already looks tired as he approaches the counter while his colleague deals with another customer with a problem, seeing that he’s being filmed and probably knowing what’s about to happen.

“We won’t fill ivermectin for COVID,” he explains immediately after being informed of the prescription.

“I have a licensed doctor that prescribed that to me,” says the man.

The pharmacist repeats himself, but is cut off in his explanation by the camera man claiming this denial is against the law.

There’s a bit of “is not” and “is so” back and forth before the pharmacist recommends that the man call the actual pharmaceutical company that decided on this policy, likely without consulting this particular individual pharmacist. Either way, however, it is absolutely legal in several states for a pharmacist to refuse to fill medication prescriptions if they believe the drug could cause harm to the patient. This pharmacy worker knows this, and refuses to back down.

“You have no right to get between a patient and a doctor,” the camera man claims. “You’re not a doctor, you’re a pharmacist.”

“Ivermectin is not authorized for COVID,” the non-doctor explains.

“It doesn’t have to be,” the man claims, falsely. “It’s an off-label product. Do you know what that means?”

“I do know what it means,” the pharmacist confirms.

“Then you should know better.”

“No, you need to research.”

The video ends before the interaction does, but it’s likely safe to assume that this man did not get his ivermectin at that particular pharmacy that day.

Doctors will sometimes prescribe medications for “off-label” purposes, meaning to treat conditions that have not been officially tested and FDA-approved for that drug. This can happen in cases of rare conditions for which there are no approved medications or when approved drugs have failed to work and all other options have been exhausted. It’s legal, but it comes with health risks for the patient and potential legal risks for the doctor as well as a pharmacy that fills such a prescription.

Pharmacies have been known to deny filling medications such as high-dose opioids due to high safety risks. Ivermectin has rapidly developed a reputation for resulting in overdoses and dangerous results when people try to use it to treat or prevent COVID-19 after right-wing pundits started touting it. Hundreds of overdose cases were reported from people buying the paste form of the medication designed for livestock and failing to consider that humans are much smaller than horses, so they should use less. A few have even died from these overdoses.

The results were fairly disgusting, and generally not great during a time when hospitals were already stressed to the breaking point with COVID patients.