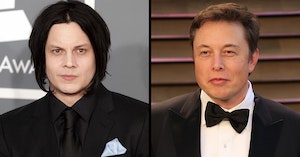 Elon Musk’s decision to reinstate Donald Trump’s Twitter account and act like it was the will of the people was a furiously divisive move, and one that many called him out over.

Jack White was among them, posting a scathing message to Instagram and pointing out exactly why Musk’s cowardly claim that he’s nothing more than a champion of “free speech” is a blatant smoke screen for his greed.

“Absolutely disgusting, Elon. That is officially an asshole move,” he began. “Why don’t you be truthful? Tell it like it is; people like you and Joe Rogan (who gives platforms to liars like alex jones etc.); you come into a ton of money, see the tax bill, despise paying your fair share, and then think moving to Texas and supporting whatever republican you can is going to help you keep more of your money.”

The musician echoed what others have frequently voiced — that Musk’s interest in Trump and the Republican party is directly related to his desire to hoard his massive wealth. And the billionaire seems to think he can do that without taking any accountability for the harm Trump and others like him cause in the meantime.

“You intend to give platforms to known liars and wash your hands like pontius pilate and claim no responsibility?” White asked, calling out the insurrection, Trump’s “attempt to destroy to democracy,” and the general unrest he’s encouraged in the United States.

“I am a believer in free speech, but for example I’m not about to let the KKK hold a rally at our record label’s performance stage,” he continued. “That’s one of the platforms we control and have a say in, it’s not a town square operated by the government. And if I owned a gas station, I wouldn’t be selling the KKK gasoline to burn crosses either and then wash my hands as if I didn’t help facilitate hatred.”

He concluded by rightly calling the purchase of Twitter a “big responsibility” and pointing out that claiming “‘free speech’ isn’t some umbrella that protects you from that.’”

“I mean, how many more billions to you need that you have to risk democracy itself to obtain it?” he asked.

In another post, White further criticized Musk and announced that he would be taking his record label, Third Man Records, off of Twitter, a promise he has already made good on.

His statements prompted yet another wave of lamentations from conservatives who are upset that punk musicians have allegedly become everything they’ve raged against, fully losing the thread as they always seem to do.

Regardless of any confused complaints about White’s stance, he raised some great points. It’s only too bad Musk’s ego isn’t likely to allow him to take them to heart.