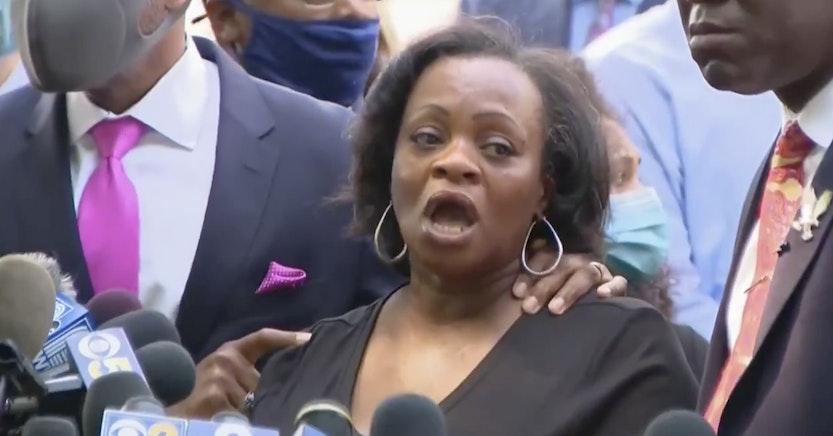 29-year-old father Jacob Blake was shot at point-blank range by a Kenosha, WI, police officer on Sunday. Bystanders captured the scene and the viral video was soon seen everywhere. Miraculously, Blake survived and was rushed to the hospital. The Chicago Sun-Times reports that Blake’s father has said that his son is now paralyzed from the waist down and doctors are uncertain if his injuries are permanent.

Blake’s attorneys provided an update on his injuries in a press conference Tuesday afternoon, detailing the gruesome damage done to his body and the grueling recovery process ahead:

#JacobBlake attorney reveals some of his injuries including: Bullet through spinal chord, multiple holes in stomach, damage to kidney & liver, and damage that forced removal of parts of colon & small intestines —> pic.twitter.com/MtRAy6oJbq

“They shot my son seven times like he didn’t matter.”

Jacob Blake’s father, Jacob Blake Sr describes his son’s shooting by police as “senseless” and tells the media that his life matters.

In the video, Blake is walking around to the driver’s side of his car with several officers with drawn guns on his back. As he starts to move into the vehicle an officer grabs his shirt and shoots him seven times, clearly with the intention to kill. Blake’s three children were in the car, witnessing their father being shot.

Witnesses have said Blake had stopped to help break up a fight, which is why the officers were called to the scene.

“They start to wrestle,” an anonymous witness told reporters at the Chicago Sun. “The officer is punching on him. Two officers come to assist. They get him down on the curb behind his vehicle. Somehow he manages to get up. They said he has a knife. All of the officers pull out their guns. … (One of the officers) tells him, ‘Get out of the car!’ and he starts shooting.”

Officers have not offered any proof Blake was carrying a knife, nor has any witness corroborated their accusation. Questions about why the police focused on Blake when the dispute was between two other people have not yet been answered.

Laquisha Booker, Blake’s partner, told NBC’s Milwaukee affiliate WTMJ-TV, “That man just literally grabbed him by his shirt and looked the other way and was just shooting him. With the kids in the back screaming. Screaming.”

Julia Jackson, Jacob Blake's mother, has a message for America:

"God has placed each and every one of us in this country because he wanted us to be here… How dare we hate what we are? We are humans… We are the United States, have we been united?"pic.twitter.com/kDYX5f4Frx