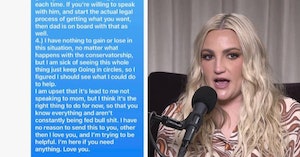 Jamie Lynn Spears’ second appearance on the Call Her Daddy podcast this week included some visuals and receipts for her claims that she was not complicit in sister Britneys Spears’ conservatorship. In the past month, Britney has gotten increasingly public about her disappointment in her sister, implying heavily that Jamie Lynn was not there for her in her time of need and at times outright saying it on social media.

Because of Britney’s accusations, Jamie Lynn has been on the receiving end of a lot of backlash from fans of her sister, and she has asked for their arguments to be handled privately. That doesn’t seem to be working, so Jamie Lynn told host Alex Cooper that she “didn’t do anything” and the attacks from fans have been overwhelming.

“I think they want me to not exist,” she said. “And if I do exist, it needs to be only to support someone else’s life. I can exist and also support, but also protect myself.”

Jamie Lynn shared legal documentation which appeared to show she had no legal connection to the conservatorship and she claims she even turned down Britney when asked to oversee a trust for her sons, knowing that would connect her to it.

“During this time, one of the things that happened was my sister asked me if something were to happen to her, would I oversee a trust for her boys,” she said. “I never even became the trustee of this thing, and that is documented by her team.”

She then went on to say that her relationship with Britney has always been up and down, and her sister would frequently block her with no warning.

“But, as I’ve mentioned previously, any time she told me she wanted help, I gave her the chances and opportunities and the people to help her,” claimed Jaime Lynn. “She knows all of that. Why wouldn’t she just have clarified that and stopped all of this?”

She then shared a text she allegedly sent Britney in which she offers advice on how to end the conservatorship and to inform Britney that one potential lawyer named Sam Ingham seemed to be in secret communication with their mother.

“Mom and her lawyers have been in constant contact with Sam [Ingham] about everything, and I first found that strange since you and mom are not even speaking,” she writes. “I did not understand why mom would be involving herself or inserting HER opinion to YOUR lawyer ESPECIALLY if you did not ask her to. I think she has your lawyer fighting more for HER agenda, then yours and it’s only delayed your progress, and cost you more money.”

The texts also claim that their father, Jamie Spears, wants out of his role in her conservatorship.

Jamie Lynn then adds, “I have nothing to gain or lose in this situation, no matter what happens with the conservatorship but I am sick of seeing this whole thing just keep Going in circles, so l figured I should see what I could do to help…l am upset that it’s lead to me not speaking to mom, but I think it’s the right thing to do for now, so that you know everything and aren’t constantly being fed bull shit…I have no reason to send this to you, other then I love you, and I’m trying to be helpful. I’m here if you need anything. Love you.”

She told Cooper that she has never shared this because of potential social and legal ramifications, but she’s sick of the public criticism.

“I get called everything, from an abuser to a human trafficker,” she said. “This is my life. Look what’s happened to my family when all these people have inserted themselves… We need to separate it all and just be a family again, or else, we’re just gonna end up back where we started.”

She added, When every headline’s gone away and everything is done, you’re still gonna be my sister. It doesn’t matter. And people need to stop inserting themselves into our situation and egging it on and encouraging it…All I wanna do is love and support my sister, and end this nonsense. This is ridiculous.”