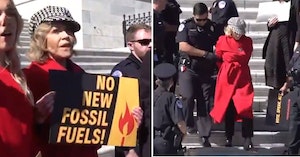 Jane Fonda Arrested For Protesting Climate Change, Vows To Do So Every Friday

Legendary actress and fashion icon Jane Fonda is using her celebrity status in the best way possible—getting herself arrested in protests against inaction on climate change every Friday for the rest of the year or until something major is done. That’s 14 weeks and 14 arrests, starting today.

CIVIL DISOBEDIENCE: New video shows actress Jane Fonda being arrested on the steps of the U.S. Capitol during a climate change protest, with Fonda demanding urgent action on a Green New Deal and fellow protesters cheering as she was led away. https://t.co/OFdgEGuLb9 pic.twitter.com/K8bVWbbYgq

Fonda, who is currently the co-star of the popular Netflix series Grace and Frankie, started this today by getting arrested on the Capitol steps along with 15 fellow demonstrators. She’s calling this series of arrests “Fire Drill Friday.”

So @Janefonda was just arrested at the Capitol. She shared with us how @GretaThunberg drew the 81-year-old activist back to civil disobedience . https://t.co/Bw7vtOYaDa

A supporter of Representative Alexandria Ocasio-Cortez’s Green New Deal, Fonda is demanding that the government “stop all new leasing permits for any fossil fuel development on public lands and waters,” because otherwise, we are “doomed.” She also supports a 30-year transition to clean energy while ensuring that all workers in the fossil fuel industry receive “decent union jobs … that can support a family,” according to the Los Angeles Times.

The actress recently moved to Washington D.C. specifically to engage in more activism of this nature after being inspired by the 16-year-old climate activist Greta Thunberg. After reading about her in the new book On Fire: The (Burning) Case for a Green New Deal by Naomi Klein, Fonda said that “the urgency came into my DNA the way it hadn’t before.”

Already a beloved activist and icon, people are gushing with support for Jane Fonda’s mission.

Who is still a bad bitch for days? https://t.co/eY4WZuUgiQ

get in the car ladies we breakin jane fonda out https://t.co/UBwFamtCuu

This woman is awesome. pic.twitter.com/R3ptXL8LwN

Me getting ready to bail my girl Jane Fonda outta jail pic.twitter.com/MZuc6foUUI

Jane Fonda: once a legend, always a legend. pic.twitter.com/CPZZqwEuiD

never forget that jane fonda is double jointed and can escape any pair of handcuffs pic.twitter.com/uy7ZxAoakc

Arrested for peacefully protesting for action on a serious matter. Thank you Jane Fonda and the other courageous women in that group for your voices. https://t.co/RCiTqoGdIC

Thank you for your service, ma’am.