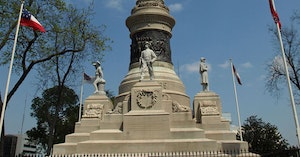 Wikipedia/Confederate Memorial on the grounds of the Alabama State Capitol, by Chris Pruitt

Anti-Racist Group Steals Confederate Monument, Threatens To Make It Into A Toilet

An anti-racist activism group called White Lies Matter has reportedly stolen a confederate monument—a stone chair that once belonged to Confederate president Jefferson Davis and happens to have a large hole in the seat —and is threatening to turn it into a toilet if their demands are not met. The chair was previously located in an Alabama cemetery and is estimated to be worth about $500,000.

Thankfully, their demands are not too difficult to fulfill. White Lies Matter has informed the United Daughters of the Confederacy, a hereditary associating granting membership only to proven descendants of confederate loyalists, that they will return the chair unharmed under a single condition.

They only ask that this Friday, April 9, for the whole day, UDC hangs up a banner celebrating the 156th anniversary of Robert E. Lee’s surrender to Ulysses S. Grant—the surrender that ended the Civil War.

The banner needs to be big and it needs to remain up for 24 hours, according to the old-timey ransom note that was sent to multiple news outlets by White Lies Matter. It also must contain a specific quote from Black liberation activist Assata Shakur: “The rulers of this country have always considered their property more important than our lives.”

“Failure to do so will result in the monument, an ornate stone chair, immediately being turned into a toilet,” the email states according to AL.com. “If they do display the banner, not only will we return the chair intact, but we will clean it to boot.”

It does look pretty dirty in the photo they included to prove that they have taken possession of the chair.

According to the Alabama news outlet, the woman who answered the phone at the UDC tried to brush it all off as “fake news,” but was preemptively made a liar by the organization, which ran an ad in local papers seeking the chair’s return two days before the ransom notes went out.

Selma police and District Attorney Michael Jackson also confirmed both the theft and the reports of the ransom note demands.

One member of the UDC called the action “grand theft,” but White Lies Matter expressed no remorse for the capture of a monument to a fight to keep Black people enslaved.

“We took their toy, and we don’t feel guilty about it. They never play with it anyway,” the ransom note reads. “They just want it there to remind us what they’ve done, what they are still willing to do. But the south won’t rise again. Not as the Confederacy. Because that coalition left out a large portion of its population. All that’s left of that nightmare is an obscenely heavy chair that’s a throne for a ghost whose greatest accomplishment was treason.”