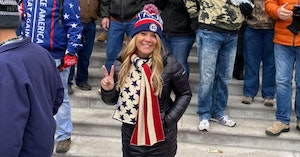 Jenna Ryan, the Texas realtor who took a private jet to Washington, D.C., to participate in the Capital riots, is now under additional fire after seemingly admitting that she was using her arrest to scam people out of money.

Ryan initially made waves for doubling down after being outed as one of the people who broke into the Capitol during the insurrection. While she was not seen committing any acts of violence herself, she used her social media to threaten lawmakers, threaten news media, and, oddly enough, promote her realtor services while storming the Capitol.

After she received negative attention for her part in the riots, she went on a deleting spree and pretended to despise the violence that happened there. And after that didn’t stop her from getting arrested by the FBI, she went on TV to ask Trump for a pardon.

Something that’s that messy from the start only tends to keep getting messier, and Ryan didn’t let us down.

On Thursday, she pleaded with “patriots”on Twitter to help pay for her “legal fees and losses due to [her] arrest and charges by the FBI for protesting at the US Capitol.”

She shared that her computers and phone were confiscated, and claimed this was all part of a “concerted effort to destroy patriotic, Christian, patriots and Trump supporters.”

People immediately began tweeting at PayPal to have them deactivate her account, but before they even had the chance, Ryan made things even messier by admitting she basically just wanted people’s money for fun.

“Take a secret? I really don’t need donations,” she wrote. “I was just giving people the opportunity to contribute and be blessed by their giving. Whoever donates to me is going to be blessed beyond measure.”

We’re in the middle of a pandemic. People are struggling to feed their families and pay their rents. And she’s really out here on social media trading on her temporary name recognition as part of an actual assault against democracy itself to grift people out of money she doesn’t even need, just because she can.

Ryan’s audacity isn’t surprising, considering how she’s gone about this whole thing so far, but it is disgusting — and it makes it perfectly obvious why she was drawn to supporting a con man living in the White House, as well.

Fortunately, PayPal got wind of her scam and shut the whole thing down, issuing a statement acknowledging that if they discover a legal defense fundraiser is being used for other purposes, the account will be terminated.

“We can confirm that the account in question has been closed,” they said.

Still, based on her track record, it seems likely this won’t be Ryan’s last attempt to drum up PR and the support of her fellow “patriots.”