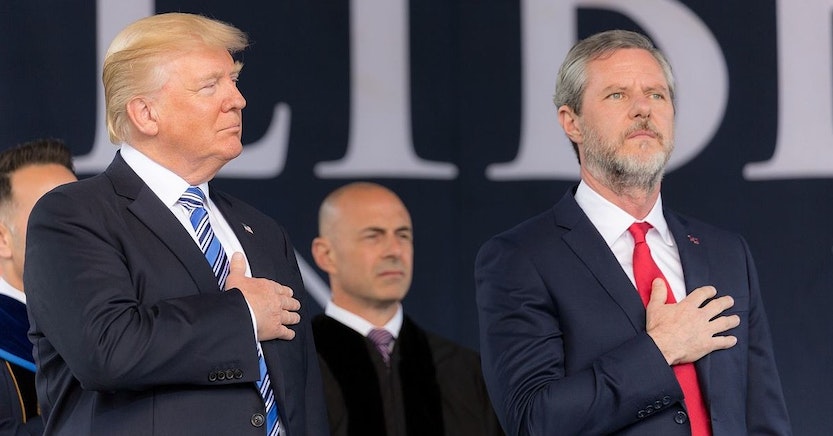 Jerry Falwell Jr. does not seem to be having the best time after losing his position as president of Liberty University, as well as Evangelical darling, for getting photographed with his pants unzipped and holding an alcoholic drink with a woman who is not his wife. According to a 911 call transcript obtained by the Huffington Post, he was drinking again when he fell down some stairs, cutting his face in the process, on August 30.

Falwell’s wife, Becki Falwell, made the call after she had to break down a door to find him lying in a pool of blood after he called her to inform her of his accident. When the dispatcher asked if he had been drinking, she said “yes,” but refused to answer when asked if that drinking had been heavy.

Becki seemed to be concerned about Falwell’s already damaged reputation, further refusing to cooperate when the dispatcher explained that a high blood alcohol level could be the reason for his excessive bleeding.

“The more I tell you the name, the more you’re going to understand why we’re not talking to you right now,” she said.

According to the 911 call logs, Jerry was “stubborn” and wouldn’t allow himself to be taken to the hospital. They described Becki as “not forthcoming.” EMTs still came to the Falwells’ place to treat Jerry’s injuries, reporting multiple lacerations on his face as well as multiple empty alcohol containers. Jerry told them he hit his head on a trashcan during the fall and appeared to be intoxicated.

“Jerry had slurred and slowed speach (sic) and would repeat things already asked,” the report noted.

The Falwells have long been sensitive about Jerry’s alcohol use, largely because heavy drinking is frowned upon in most Evangelical Christian communities and students at Liberty University are strictly prohibited from consuming alcohol. School staff and donors had previously complained that Jerry would be on campus “appearing drunk or smelling of alcohol.”

There have not been any suggestions of ill health from Jerry since the falling incident, so we can assume he recovered. However, many are questioning whether he might have a bit of a problem with alcohol.

Others can’t help but jump at the chance to again make pool boy jokes.