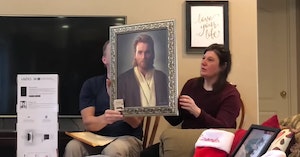 Christmas is the best time of the year to give thoughtful presents to the most important people in your life, just little tokens of appreciation to show them you care. But one Utah man decided to turn the most wonderful time of the year into April Fool’s, and the prank he played on his parents in the process was priceless.

Ryan Buchanan’s family has always been religious, and he told Insider that there were always a lot of pictures of Jesus hanging around his parents’ house as he was growing up.

Now, obviously, when we say “pictures of Jesus” we mean artistic interpretations of a Biblical figure who is generally portrayed as a very lightly smiling white man with long brown hair, dressed in flowing robes of some sort. Sounds familiar, right?

When Ryan realized the similarities, he knew he had to get his folks a portrait of Obi-Wan to hang alongside all their Jesus artwork to see if they’d notice the difference.

Reader, they did not.

Video of the unwrapping shows just how thrilled Ryan’s parents were with their new Jesus, and honestly, if they’ve never seen the prequels, it’s hard to blame them for jumping to the assumption that this is their Lord and Savior, wrapped up in polka dots and shoved under the tree.

Ryan also shared an image of Obi-Wan hanging in a prestigious spot up on the wall after the unboxing, noting that he’s “not sure how to get out of this thing alive” once his mother figures out what he did.

Even though the prank is two years old, it’s one that ends up being revisited every year, as people share the joy of a ridiculous Christmas gift. But what everyone really wants to know is if Ryan’s parents ever figured things out, or if Ewan is still just chilling on their wall, receiving their unintentionally idolatrous prayers.