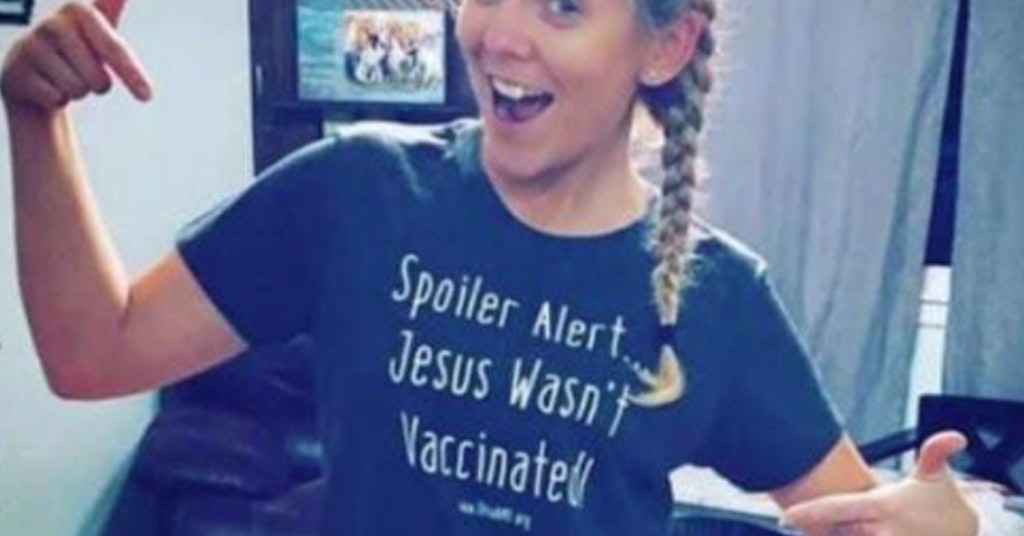 Hey Woman In The ‘Jesus Wasn’t Vaccinated’ T-Shirt, I’ve Got A Few Thoughts

The Twitter account “Christian Nightmares” posted a photo of a young woman in a shirt that says “Spoiler Alert… Jesus Wasn’t Vaccinated” today and the jokes are pouring in. It’s unclear who the woman is or if she’s wearing the shirt seriously or ironically, but regardless, the shirt exists and anti-vaxxers are out of control.

There are so many things wrong with this that it’s difficult to know where to get started. Jesus did die young, but also he was supposed to die, and if he had been vaccinated there would have been less of a chance of him dying as a child before he was supposed to. Then again, Jesus wasn’t really young for the time, people died in their 30s back then all the time, in part because medical science wasn’t a thing at all around the year 0.

Christian Nightmares, by the by, has been named by Buzzfeed as “the best place on the Internet to find creepy Christian sh*t,” and clearly they are not wrong.

I tried and was unable to locate this particular shirt anywhere, so it’s possible that the woman in the photo made it herself. However, there are plenty of shirts available that appear to be unironically expressing the same message, so humanity is definitely screwed.

But at least we have jokes!

The resulting illness he ended up getting, though, made him feverishly hallucinate that he was the Son of God.

Technically, per Pauline Christian theology, Jesus was like a vaccination God delivered to the earth for Man’s sin, but Okay.

He wasn’t WHITE either… pic.twitter.com/C1pb6aPpWb

Ding ding dipshit people died from simple stuff back then that we now have vaccines for. pic.twitter.com/NmiVUqbsLU

Why would the son of god need a vaccine? If he can get sick he’s not much of a god…

And look where that got Him. Dead at 33 cuz His dad fucked him up. Coincidence? I think not.

Gawwwaduh must have vaccinated Jeezusah before he went to Earth because it would have been embarrassing for his story to have ended with polio. lol

So she’s admitting that not all things are possibly through god.

Dude needed a vaccine against getting nailed to a block of wood.

Too soon, dude. Too soon.