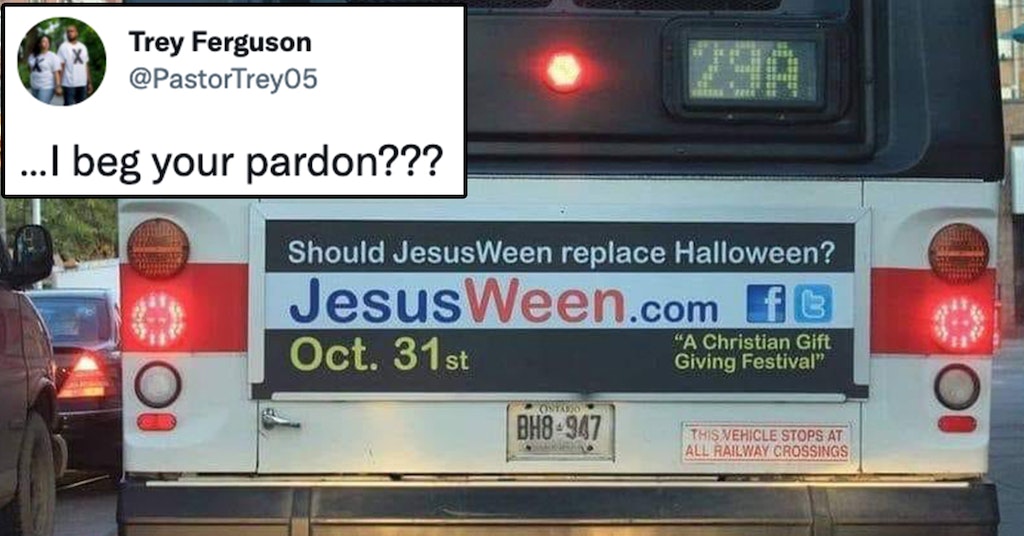 Despite already having Christmas and Easter, two of the biggest holidays around the world, some Christians don’t think that’s enough. Never big on sharing with non-Christian groups, they’ve occasionally tried to either co-opt Halloween or destroy it altogether. God forbid anything happen on this planet that doesn’t revolve around their Bible!

The current attempt at this is pretty magical, by which I mean it sounds so far-fetched that it surely must be fiction.

“Should JesusWeen replace Halloween?” reads the back of a bus driving around Ontario, advertising JesusWeen.com — “A Christian Gift Giving Festival.”

Of course, there’s always a catch with religion, and a quick trip over to JesusWeen.com shows that the actual intent of the movement (if you can call it that) is to switch Halloween out with “World Evangelism Day.”

“We are focused on helping people live better lives through the knowledge of our Lord and Saviour Jesus Christ,” the site reads. “JesusWeen is a God-given vision which was born as an answer to the cry of many believers who find joy in sharing the gospel with the unsaved. The dictionary meaning of Ween is to believe and think. We therefore see October 21st as a day to expect a gift of salvation by receiving the Gospel of our lord Jesus.”

They don’t want to give us gifts! They want to proselytize! Who could have seen this coming??

JesusWeen isn’t actually a new concept, it’s just one of those things that everyone ignores year in and year out because it’s so irrelevant — and incredibly dull-sounding compared to Halloween.

But the viral image of the bus advertising it across Canada has Twitter talking.

If Christians want to take ALL of their evangelizing and shove it onto one day, we can have that conversation. But considering they already barge into everyone else’s lives with that on a daily basis, it seems much more likely they just want an excuse to ramp it up on “JesusWeen.” So that’s going to be a pass from the rest of us, guys. Halloween stays.