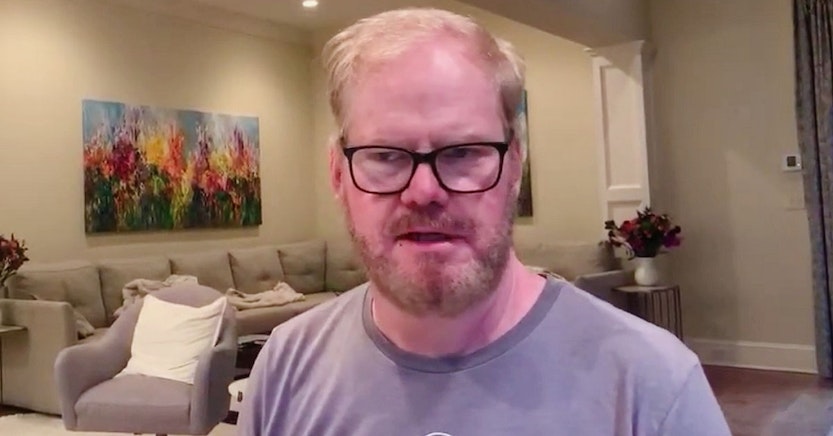 As November fast approaches (or slowly—everything feels slower in quarantine time, right?), people are getting vocal about voting, including celebrities. Comedian Jim Gaffigan, who is known for his relatively profanity-free sets, went on a Twitter spree, criticizing President Trump—and did not hold back.

“Look Trumpers I get it. As a kid I was a cubs fan and I know you stick by your team no matter what but he’s a traitor and a con man who doesn’t care about you. Deep down you know it. I’m sure you enjoy pissing people off but you know Trump is a liar and a criminal,” Gaffigan wrote.

The Troop Zero star, 54, did not stop there. He wrote multiple tweets calling out President Trump for his outrageous behavior as well as criticizing those who support Trump.

“I know you hate snobs and elites I get it but look at Ivana [sic] and that douche bag Jerod [sic]. Think they are on your side? Do you think they’ve ever done a real days work in their lives. Wake up,” he said.

He also had words for people who told him to “stick to comedy”: “To those of you who think I’m destroying my career wake up. If Trump gets elected, the economy will never come back.”

Gaffigan, who is Catholic, also pointed fingers at former Notre Dame football coach Lou Holtz, who attacked Joe Biden over his Catholicism in an RNC speech this week. Holtz said that Biden is a “Catholic in name only” because he is pro-choice.

“F*** Lou Holtz,” he wrote. “Biden is Catholic in name only? Compared to who? How many abortions did trump pay for? How many women has he raped? How many times did pull the shit he did in Ukraine. Wake up. He’s a crook and a con man.”

Gaffigan also had words for those in Trump’s inner circle, saying that Trump “literally ran Paul Ryan out of politics.” He also said that Bill Barr “is dirty.”

“You know if Trump gets re-elected it’s over. How many books have to be written?”

Some folks were shocked to hear the clean-cut Gaffigan using profanity and harsh words to describe Trump and his supporters. But others were supportive of Gaffigan’s warnings to the public and happy the famously apolitical comic was using his platform to speak out against the Trump administration.

Gaffigan’s rant was the number two trending topic on Twitter last night, behind the RNC itself.

Sometimes, you just have to scream into the Twitter void—and hopefully you will change some hearts and minds.