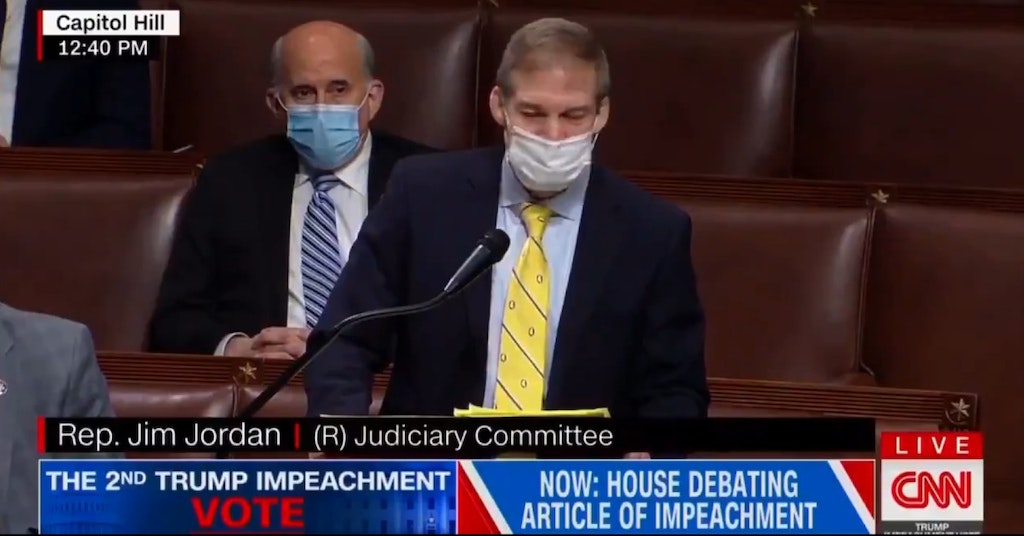 
Representative Jim Jordan left many scratching their heads after a rambling speech he made in defense of Donald Trump as the House debates the vote on the newest article of impeachment against the outgoing president.

Not only did Joran repeatedly refer to the phenomenon known as "cancel culture" in reference to impeaching a president for incitement of insurrection, but he also brought up the Wright Brothers, Chuck Yeager, and the moon landing.

His point appeared to be that "America is good" but nobody can figure out why that should be an argument in favor of not impeaching Trump.

Jordan's overall goal seemed to be downplaying Trump's role in the attempted coup that took place at the Capitol last week as more alarming details emerge about the assault.

The representative claimed that Trump's only offense was giving "a fiery speech to a crowd of partisans," ignoring the fact that the speech was immediately followed by an insurrection that left five dead.

"Cancel culture" is typically used to refer to celebrities and influencers losing fans after they do or say something harmful, or after something harmful is dug up from their past. The term came into being long after the founders of the nation encoded the process for impeaching bad presidents into the U.S. constitution.

Jordan, however, may have good reason to fear the specter of "cancel culture" considering the fact that he ignored multiple reports of sexual abuse as an assistant wrestling coach at Ohio State University. Six former wrestlers have come forward to say that Jordan knew about the team doctor's abuse and did nothing.

Maybe not, though, since people bring this up any time Jordan is in the news and yet he still remains a United State representative in spite of everyone being constantly done with his annoying, fake patriotic rhetoric.