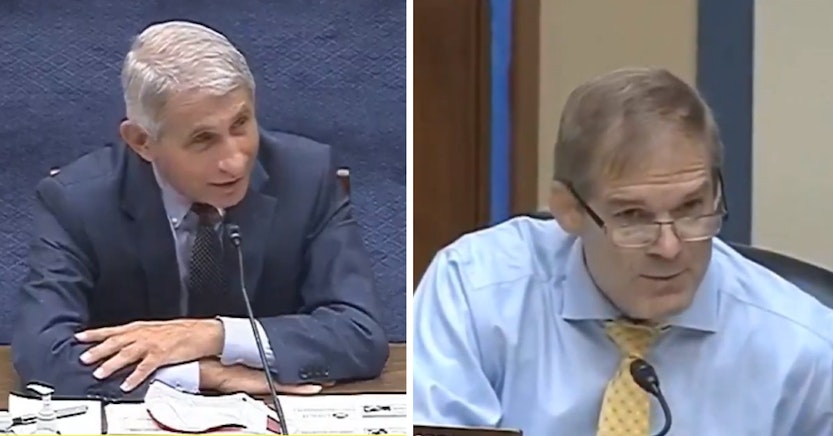 Republican Representative and die-hard Trump ally Jim Jordan tried his hardest to get Dr. Anthony Fauci to say that people shouldn’t protest during the pandemic, but the head of the federal coronavirus task force would not play ball. During a subcommittee hearing on the ongoing crisis, Jordan used his time to focus in on the warnings against gathering in large crowds, using this to try and push a political point about national uprisings against police brutality.

“Should government limit the protesting?” he asked.

Many have pointed out that the protests represent a second national crisis that is also killing people, but Fauci was determined to keep things professional and refuse to give Jordan the sound bite he was looking for.

“I don’t think that’s relevant,” Fauci said, adding, “I’m not in a position to determine what the government can do in a forceful way.”

“Is there a world where the Constitution says you can favor one First Amendment liberty, protesting, over another, practicing your faith?” Jordan pressed.

“I’m not favoring anybody over anybody,” Fauci said. “I’m just making a statement that’s a broad statement, that avoid crowds of any type, no matter where you are, because that leads to the acquisition and transmission. And I don’t judge one crowd versus another crowd.”

Jordan then dropped any attempt at subtlety and specifically named Portland, where Black Lives Matter protests have been held every night for 63 straight days, intensifying after federal agents were sent in to, you might say, “limit the protesting.”

“I haven’t seen people during a church service go out and harm police officers or burn buildings, but we know that for 63 days, nine weeks, it’s been happening in Portland,” Jordan said. He did not mention that nobody had been tear gassed or snatched of the street and thrown into unmarked vans for going to church, either.

“I don’t know how many times I can answer that,” Fauci responded. “I’m not going to opine on limiting anything.”

This went on and on until Jordan’s time expired, at which point Fauci physically waved the congressman off, which Mashable liked so much they made a reaction gif out of it.

Fans of Dr. Fauci are quite happy with how he stood his ground against the attempt to make him say that weekly religious gatherings that could easily be done on Zoom and popular uprisings against government oppression are the same thing. They are also rather tired of Jim “Gym” Jordan.