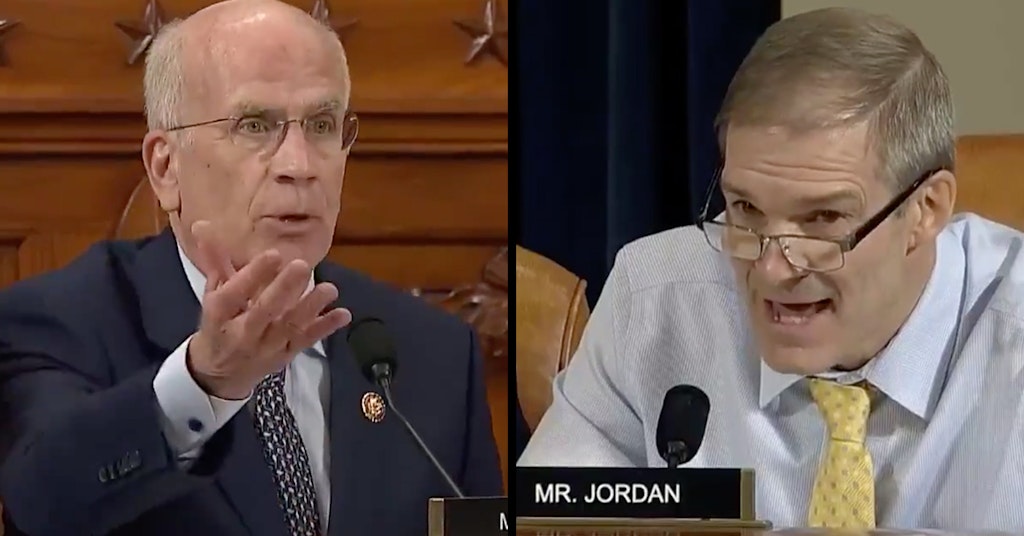 
A moment of levity stood out during the first day of the impeachment inquiry hearings into President Donald Trump.

About four hours into the televised hearings, Rep. Peter Welch (D-VT) clapped back at Rep. Jim Jordan (R-OH), who had argued that the White House whistleblower was the one who kicked off the Ukraine scandal.

Jordan, the Freedom Caucus member currently facing a number of allegations that while he was an assistant wrestling coach at Ohio State University, he knew—and remained silent—about the sexual assault of multiple young men by Dr. Richard Strauss, said: “There’s one witness, one witness that they won’t bring in front of us, they won’t bring in front of the American people, and that’s the guy who started it all, the whistleblower.”

Jim Jordan says Congress will never get a chance to question the whistleblower calling them the one "who started it all."

Welch: I'd be glad to have the person who started it all to come in and testify. Pres. Trump is welcome to take a seat right there. pic.twitter.com/XIWo9Jt1a3

Seeing his opening, Rep. Welch replied: “I say to my colleague, I would be glad to have the person who started it all come in and testify. President Trump is welcome to take a seat right there,” he added, as the hearing room burst out in laughter.

This response to Gym Jordan beclowning 🤡himself will live on in the "Oh SNAP! Hall of Fame"
Rep. Welch for the win 👍🤣 https://t.co/2hDKa8E7sA

Rep. Welch has it exactly right. The man who started it all is @realDonaldTrump. https://t.co/uN9jSW11Jg

I was truly proud of how our House DEMs conducted themselves in the impeachment hearings today.

They were disciplined, measured, serious, and prepared. They brought their "A" game.

So far the best moment.

I will carry Congressman Welch’s baby.