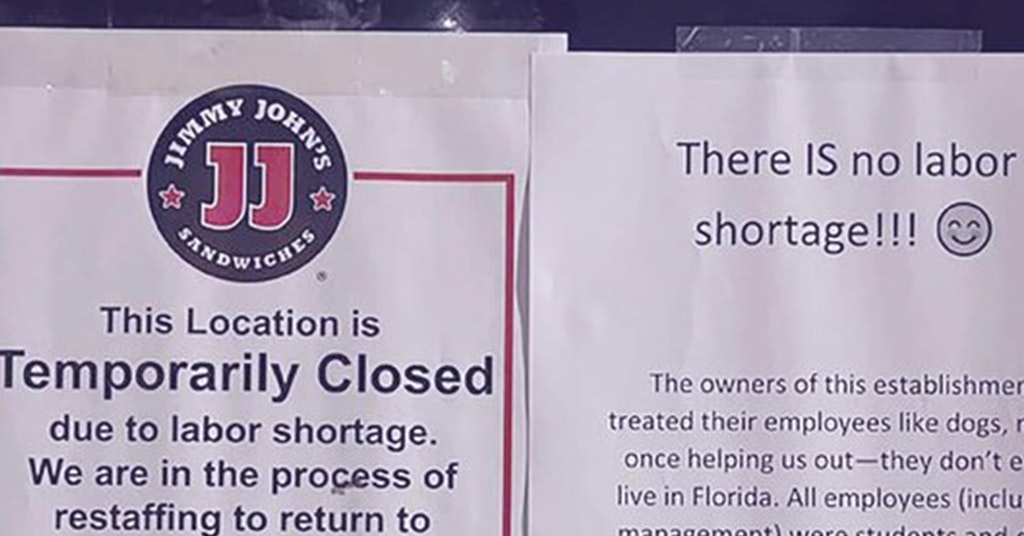 Jimmy John’s employees set the record straight recently in an image from one of the franchise locations that has gone viral.

A photo captured two signs posted outside of a Jimmy John’s somewhere in Florida. The first, which appears to be from management, notes that the “location is temporarily closed due to labor shortage.”

“We are in the process of restaffing to return to normal operations and would like to apologize for the inconvenience,” it reads.

Companies across the country have taken to blaming a “labor shortage” for keeping locations understaffed, while workers have repeatedly pointed out that companies that pay livable wages and create non-hostile work environments aren’t experiencing any such shortage. In other words, people are simply quitting bad jobs — that’s not a shortage, that’s part of how capitalism works.

And people assumed to be former employees of this particular Jimmy John’s location were quick to call out the real situation.

“There IS no labor shortage!!!” a sign posted directly next to the first one reads. “The owners of this establishment treated their employees like dogs, never once helping us out—they don’t even live in Florida.”

The writer continued, claiming that all of the employees were students, including the management, and ran everything well “with no help from the owners.”

“The past few months of crappy business have been the result of lazy, careless ownership,” the sign concluded.

Workers standing up against bad management and poor working conditions has been a popular genre on the internet in the past year, and this post sparked a wave of congratulations for the employees’ decision not to let the higher ups twist the narrative.

And plenty of folks used the opportunity to point out negative things about Jimmy John’s as a whole.

There’s such a simple solution to the “labor shortage” these companies keep running into. If only someone could figure out what it is…