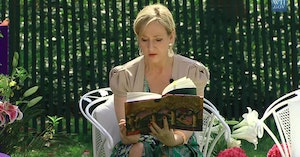 J.K. Rowling Sparks Outrage For Defending Woman Who Was Fired Over Transphobic Tweets

Harry Potter author J.K. Rowling is again facing backlash online, this time for defending a woman who lost a chance to have her contract renewed with an employer for repeatedly posting anti-trans rhetoric on her Twitter account. In doing so, Rowling engaged in some of that transphobic language herself, confirming concerns that many transgender individuals and allies had that the author is on the wrong side of history on this topic.

The woman Rowling has sided with is Maya Forstater, who sued her employer after they decided not to renew her contract following the discovery of transphobic tweets that included “men can not change into women.”

This kind of misrepresentation of trans people is common among a subsection of feminists known as TERFs, or trans-exclusionary radical feminists.

Forstater argued that her tweets were protected speech under the U.K.’s 2010 Equality Act, but the judge overseeing the case has ruled against her.

Don't let the narrative about this be

"JK Rowling in internet spat about whether trans women are women"

This is "JK Rowling stands with woman who lost court case about her choice to be abusive towards trans people in her workplace, so her contract was not renewed"

“I conclude from … the totality of the evidence, that [Forstater] is absolutist in her view of sex and it is a core component of her belief that she will refer to a person by the sex she considered appropriate even if it violates their dignity and/or creates an intimidating, hostile, degrading, humiliating or offensive environment,” Judge James Tayler stated in his ruling. “The approach is not worthy of respect in a democratic society.”

In response to this, Rowling tweeted with the hashtag #IStandWithMaya, claiming that she had been fired for “stating that sex is real.”

Ah finally. The mask is off. pic.twitter.com/22DVYzZglJ

This is a misrepresentation of the tweets that resulted in a company declining to renew Forstater’s contract and also confirms that Rowling believes in what Judge Taylor called “absolutist” views of sex that are typical of TERFs and come down to a refusal to recognize trans women as women.

This is not the first time Rowling has been accused of transphobia. In 2018, she caught heat for liking a tweet that called trans women “men in dresses,” though she claimed that liking the tweet was a mistake. Some questioned how such a mistake could be made, and renowned writer and journalist Katelyn Burns, a trans woman herself, investigated.

A whole bunch of cis people owe me an apology for dogpiling me over this story from 2 years ago where I was quite even-handed in trying to answer whether JK Rowling is transphobic. https://t.co/eTEwTbtinU

Burns found that Rowling had previously liked a transphobic Medium article and pointed to transphobic tropes in Rowling’s 2014 crime fiction novel The Silkworm. Although Burns concluded that Rowling is no more transphobic than most people, she suffered harassment for her investigative piece from stalwart Harry Potter fans.

This latest tweet, however, pushes Rowling into a new category of those committed to misgendering trans people, which is an extremely harmful action to a group that already faces massive prejudice and discrimination.

It’s so strange to me that someone with enough imagination to portray people irreverently drinking a potion to turn into someone of a different gender somehow refuses to recognize the enormous body of scientific and medical experts validating trans folks w/ evidence.#JKRowling

My daughter, who is trans, is a big fan of yours. It breaks my heart to see you post something indicating that discrimination against her is perfectly fine behaviour for an employee.

we cannot take for granted that our dignity will be championed by anyone other than us — and even then, there are members of our community seemingly hellbent on giving cis skeptics workarounds to our dignity, apparently just for the sake of dissenting from community consensus

The saddest thing is that the woman who inspired millions of kids to be good to each other, include each other despite our differences and stand up against those who would oppress us – is now a bigot herself.

I grew up as a trans child reading your books as an escape. I would often pick out names from characters to give to myself, before I ever felt comfortable in who I was. This decision, to support people that hate me, and want to do me harm. It brings me to tears… Why. Why?

I don't wanna read jokes about it or spend any mental energy creatively dunking on her.

it just makes me sad that it's 2019 and my existence is still up for debate.

I’m not usually one to rely on your books for political analogy, because they’re for children, obviously, but I think it’s appropriate to make an exception in this case: You’ve just joined the Death Eaters.

Harry Potter and the whole crew would disapprove, Rowling.