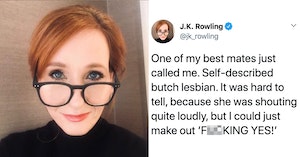 J.K. Rowling Faces Backlash After A Series Of “Anti-Trans” Tweets

Harry Potter writer J.K. Rowling was accused of making transphobic statements on Twitter over the weekend. This isn’t the first time Rowling has been criticized for being a TERF (trans-exclusionary radical feminist)—six months ago, Rowling offered her support for a researcher who lost her job due to transphobic tweets. She came under fire then, and folks are certainly not letting her comments go unchallenged now.

Rowling shared a headline for an opinion piece which read, “Opinion: Creating a more equal post-COVID-19 world for people who menstruate.” The inclusive wording peeved Rowling, who responded: “‘People who menstruate.’ I’m sure there used to be a word for those people. Someone help me out. Wumben? Wimpund? Woomud?”

In the middle of a pandemic and civil unrest over police violence towards Black people, Rowling’s tweets further reminded fans of her writing that there is inequality everywhere—including from the beloved Harry Potter creator. Twitter users were quick to criticize Rowling for appearing to define a woman as a person who has a menstrual cycle and saying that sex or sex organs define gender identity. Her followers said that many people who identify as women, including transgender women, may not get their periods while some people who do not identify as women may still menstruate.

Later, Rowling posted an additional series of tweets trying to explain herself, but folks weren’t really having that either.

“I know and love trans people, but erasing the concept of sex removes the ability of many to meaningfully discuss their lives. It isn’t hate to speak the truth,” Rowling tweeted.

“The idea that women like me, who’ve been empathetic to trans people for decades, feeling kinship because they’re vulnerable in the same way as women — ie, to male violence — ‘hate’ trans people because they think sex is real and has lived consequences — is a nonsense.”

“JK Rowling continues to align herself with an ideology which willfully distorts facts about gender identity and people who are trans,” GLAAD wrote. “In 2020, there is no excuse for targeting trans people.