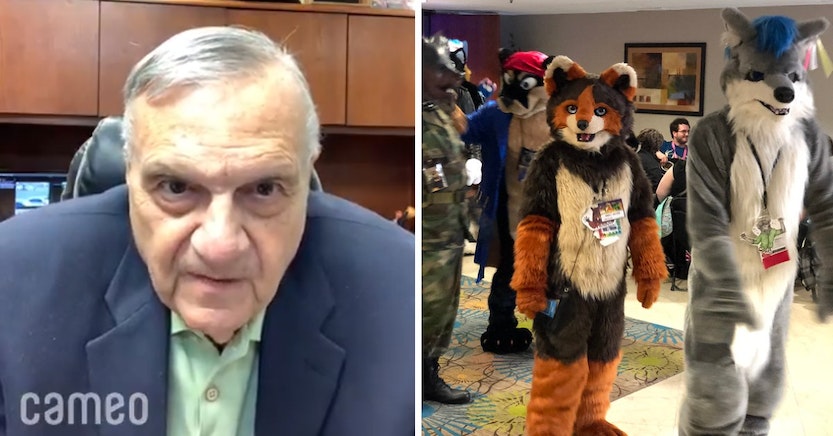 Former Arizona sheriff Joe Arpaio, famous for defying Supreme Court orders that he stop enforcing a racist law that they had ruled to be unconstitutional due to racial profiling, is in the headlines again for accidentally welcoming a furry convention to the state of Arizona.

Arpaio has been making a living off of the app Cameo, which lets public figures charge money for personalized messages on request. One of those requests apparently involved next year’s Arizona Fur Con.

Clearly, the 90-year-old did not know what he was welcoming.

“I’ve always loved animals, fought those that abused animals and will continue to do so. In any event, have a great convention.”

What Arpaio clearly did not know is that the furry community is less about fighting for abused animals and more about connecting with the animal within. Fur Con often involves people showing off their “fursonas” with full animal costumes referred to as “fursuits.”

While most of this activity is entirely non-sexual, people familiar with the culture notes that the Cameo user who requested the message from the former sheriff goes by “Sir Yiffs A Lot.” According to AZ Central, “yiff” in the furry community is something sexual. We, like Arpaio, wouldn’t know.

In spite of his ignorance, people could not help but react with horror to the combination of Joe Arpaio and furries. It didn’t help that he all but announced his fursona.

“As far as what animal I would like to be, I’m kind of partial to dogs,” he says. “But I love all animals. Thanks.”

There has been some debate as to whether the request sent by Sir Yiffs A Lot was meant to be a trick or if they genuinely desired Arpaio’s blessing for the convention, but Arpaio told AZ Central that the user had requested messages from him on Cameo before. Though they were able to contact the user, the individual declined to comment on the record.

Over on Twitter, there are many comments on the record, and they mostly follow the same theme.