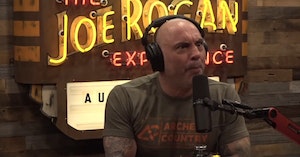 Joe Rogan is still doing his podcast and getting things incredibly wrong on it, somehow still even managing to involve COVID-19 in his wrongness as Spotify pays him millions to be wrong to millions of listeners. This one evolved over the course of less than two and a half minutes as Rogan goes from introducing a fake story about an Australian state banning people from growing their own food, to hoping it’s not fake, to realizing it’s definitely fake.

“It’s gotta be a, a real thing,” he says after a member of his team says they can’t find any real articles about this claim. “It seems too good to not be.”

Rogan’s producer might have tried looking into the recent Reuters fact-checking articles for this one, because they posted one last week explaining that no, the bill currently being debated in Victoria is not going to ban people from growing food for themselves. The bill addresses some agriculture issues and tweaks some regulations around food safety and cannabis growth, but according to multiple experts, there is no language that could be interpreted as “no more tomato plants in mom’s garden.”

This rumor began to pop up randomly on social media and was widely shared on platforms like Twitter without offering the slightest bit of evidence to support their claims. Oddly, a similar rumor started around a New Zealand law, which Rogan’s producer did seem to find some mention of, but that was also a false claim.

In spite of previously acting like he learned his lesson when he called himself a “f—ing moron” for spreading COVID misinformation, Rogan keeps spreading COVID misinformation and getting his episodes banned on Spotify after they paid him millions to make them. He quickly links the fake claims he read on Twitter or whatever to the pandemic, dreaming up the idea that Australia wants to stop people from growing food for their own mouths because it might spread the illness.

“And they were saying ‘well, you can grow your own food but what if the diseases from your food, it infects the population, kills us all, we can’t have that,'” said Rogan in his special stupid guy voice.

Nobody ever said that. The only posts that Reuters could find with any hint of information show tweets from the very real-sounding Apex World News falsely reporting the claim and stating “biosecurity” as the reason given for the non-existent bill. The rest is made up entirely in Joe’s shiny head.

As Rogan begins to search for the news himself after his producer clues him in that he’s done fallen for fake conspiracy news again, he soon comes to remember the reason he called himself “not a respected source of information, even for me.”

“Dammit. It better not be fake. It might be fake,” he says.

Our favorite part though is at the very end of the clip where his ego booster guy suggests that maybe all fake news is just a precursor to real news, for absolutely no conceivable reason that is not backed up by human history at all.

“But even if it’s fake, like, the fake is usually the warning,” he says.

Look, if you want real instances of people being banned from growing things on their own property, you have only to look into many a U.S. homeowner’s association who think that gardens look tacky and will drive down property values. Stop spreading false information, Joe Rogan.