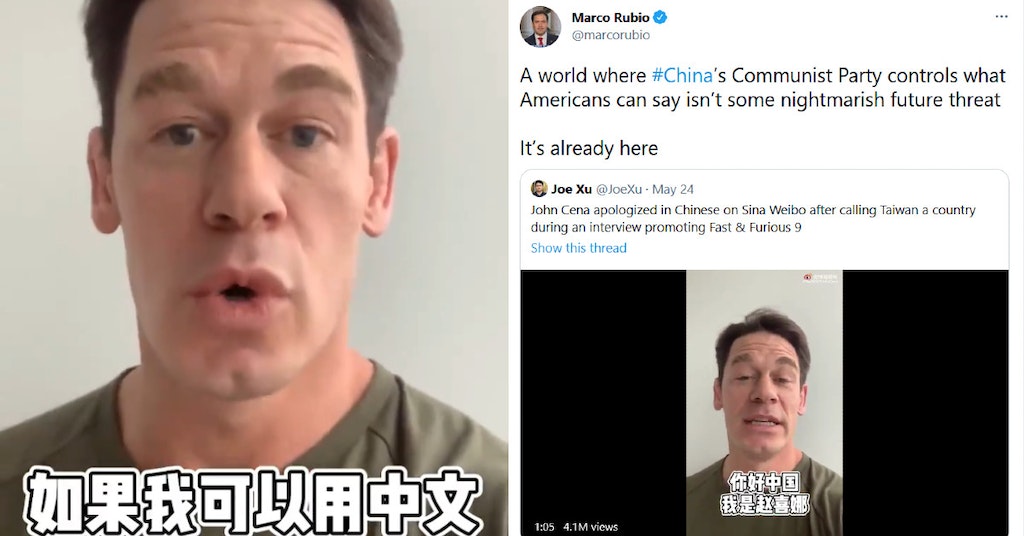 Professional wrestler and actor John Cena got caught up in an international incident while promoting the latest installment in the Fast and Furious franchise, angering China by referring to Taiwan as a country when referring to a Taiwanese broadcast of the film. The Chinese government hates it when you do that because they insist that Taiwan is still a territory under their authority, though many Taiwan residents strongly disagree.

In order to try and smooth things over with a country known for censoring or banning films that they don’t like for whatever reason, Cena issued a video apology in Mandarin, which is no easy feat for a native English speaker. Unfortunately for him, the U.S. political party that loves to make China into a combination scapegoat and boogeyman hated that perhaps even more.

Republicans like Senator Marco Rubio are now accusing Cena of “bowing” to China with this apology, something he was likely pressured into by the studio making Fast 9. The party that can’t even begin to recognize the nation of Palestine’s right to exist is now very concerned about the sovereignty of Taiwan and the Taiwanese people’s right to self-determination without repression by a powerful state with vast international support.

“Yeah, John, you were correct. On your bowing to the Chinese Communist Party… I don’t see you!” wrote Trump’s Secretary of State Mike Pompeo. “We must stand with Taiwan and for freedom.”

It’s no secret that American film studios make concerted efforts to appeal to and avoid offending China due to the fact that after the U.S., it’s considered the world’s second-largest box office. Action movies like those of the Fast and Furious franchise do particularly well overseas, and China contains a whole lot more potential viewers than Taiwan. A 2020 report by PEN America detailed how these studios make script and casting decisions with these facts in mind.

“Within the pages of this report, we detail how Hollywood decision-makers and other filmmaking professionals are increasingly making decisions about their films—the content, casting, plot, dialogue, and settings—based on an effort to avoid antagonizing Chinese officials who control whether their films gain access to the booming Chinese market,” they wrote.

This kind of thing tends to rile up the kinds of racists who like to call the novel coronavirus the “China virus” as well as genuine freedom of speech advocates. Many on the left-wing of U.S. politics were also unhappy about Cena’s apology, demanding recognition of Taiwan’s self-governance since 1950.

The U.S. has not officially recognized Taiwan as an independent nation separate from China since 1979. Currently, only 13 nations plus, for some reason, Vatican City, recognize Taiwan’s sovereignty. Efforts by Taiwan to assert their right to independence tends to be met with violence by China, and it’s interesting to see U.S. Republicans recognize this as a problem while not being able to see it in other parts of the world, including in their own dealings with territories like Puerto Rico.