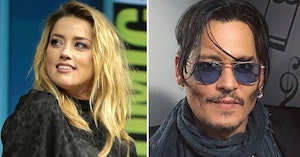 A leaked audio clip seems to contain an argument between actors Amber Heard and Johnny Depp, formerly married, in which Heard admits to hitting Depp during their altercation. The Pirates of the Caribbean star faced criticism and lost his role in the Pirates franchise following accusations of abuse from Heard, and now fans are using this audio to defend him with the hashtag #JusticeForJohnnyDepp.

The audio allegedly records Depp directing Heard to tell a third party, “Travis,” what had “just happened.” Depp accuses his ex-wife of punching him in the face, which she denies, but she then seems to repeatedly admit to hitting or slapping him.

“I don’t know what the motion of my actual hand was, but you’re fine, I did not hurt you, I did not punch you, I was hitting you,” the woman’s voice says. She later yells at him, calling him a baby, and admits that she started “a physical fight.”

It wasn’t long before Johnny Depp fans were flooding Twitter with support and demands for justice, accusing Heard of being the abuser in the relationship and renewing vigor in a Change.org petition to recall Heard from the Aquaman sequel.

When Amber Heard accused Johnny Depp of domestic abuse y’all cancelled him. She LIED, and intentionally tried to ruin his life. Where tf is this energy now that the truth is out that she’s a manipulative monster? #JusticeForJohnnyDepp pic.twitter.com/tmYiC8PDom

Heard filed for divorce and obtained a temporary restraining order against her ex-husband in 2016, claiming that he had been physically and verbally abusive throughout their relationship. She later wrote an op-ed for the Washington Post that appeared to address this abuse, leading Depp to file a $50 million defamation lawsuit against her claiming that he was the victim of abuse in the relationship.

Both Depp and Heard have produced photos of bruising and other injuries, accusing the other of being responsible.

Heard’s attorney Roberta Kaplan has responded to the released audio saying that Heard was fighting back and pointing out that a person can participate in physical violence within a relationship but still be a victim of abuse.

idk if you guys are ignorant or just stupid / hate women, but some random audio clip doesn’t negate any claims or pieces of evidence from Amber Heard. and the incident in question was already talked about in Amber’s deposition, where she talked about defending herself… ???? pic.twitter.com/GSxyqgEKzE

“The fact that a woman fights or talks back does not mean that she has not been the subject of repeated domestic violence and abuse,” Kaplan told Newsweek. “It’s a myth to say, as Mr. Depp apparently is implying, that if Ms. Heard slapped him, then she can’t also be a victim. That is just not true.”

One in four men has experienced physical violence from an intimate partner (as well as one in three women) according to the National Coalition Against Domestic Violence. This includes actions like slapping that aren’t always considered to be domestic violence. One in seven men (and one in four women) have been victims of “severe” physical domestic violence like beating or burning.

It’s also not uncommon for an abusive individual to accuse their victim of being the abuser, and both Heard and Depp have been accused of physical violence against others in the past.

Unfortunately, it’s impossible to determine the full truth around a volatile relationship from a single short audio clip. The defamation suit against Heard is ongoing with no end in sight, and even the result of that will likely not settle the matter in any kind of satisfying manner.