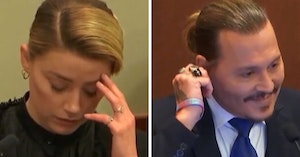 Let’s all start by noting that “body language expert” is at best pseudoscientific job in a field that has been debunked. Body language has been proven not reveal inner intent or feelings.

However, people sure do love it when “experts” pop up and give their two cents about celebrities, so with the understanding that this is all for fun and a bit of a lark, let’s see what Janine Driver has to say about Amber Heard and Johnny Depp in their court case.

Driver was in the courtroom for the trial and also spoke to CourtTV to share what she saw.

It’s called contempt. It’s on the left side of her face, right there. It’s moral superiority. And it’s out of place, especially for a battered woman. I work with battered women. I myself was dating a hotshot lawyer in my 20s who beat me up and let me left me for dead in his driveway. And I have to tell you, battered women or women who are domestic violence survivors—they’re not leaking content.

Driver tended to focus on Heard. She also said that Heard’s facial language was “morally superior.”

She spoke about Depp, pointing out his occasional smile. Driver said that was an attempt to hide his pain.

You’ve seen it throughout the trial and you’ve seen this anytime he talked about abuse from his mother as a kid. This right here, this smile shows us when people feel vulnerable or emasculated. They will often smile in those moments. Why? To overcome the pain they are experiencing. It’s almost like a way to not let us see how much suffering they are in. And it becomes a defense mechanism that people will use throughout their life.

So I’m sure that Johnny Depp has been doing this for years. In matter of fact, we have seen this in other interviews when he is uncomfortable about something, especially when he is talking about being emasculated by something Amber may have done.

So this smile right here is saying “I’m uncomfortable.” and here is where he is talking about two years later and now there is something in the Washington Post, it’s never ending. And he again laughs in court when he talked about abuse from the mother and he is talking about being transported back into this kid-like brain, about the pain and trying to avoid it and we see him laughing.

Driver said his smiles were showing that he felt weakness and vulnerability while talking about abuse he experienced in order to mask the pain he feels. The nervous laugh, she said, is from him being emasculated.

Heard, Driver added, feels shame, anxiety, and stress when she touches her face.

And let me tell you what happens here. When we touch our face, even if there is an itch, what that does to our brain is it does a reset, it’s like recharging your cellphone it does a cognitive reset and it does an emotional reset. So all these hormones begin to get released in our body, so this is what we see here.

In another clip, Driver speaks about Heard again, pointing out that as Heard touches her face and forehead, that indicates feelings of shame.

Driver says there is no indication of sadness, no pulling down of the mouth or eyebrow-knitting.

Now, what Amber Heard does seconds later is she then puts her hand up by her forehead. And when she does this, this is an indication of shame… What’s missing here is sadness. I’m not seeing deep swallows, I’m not seeing the corner of her mouth curved down, I’m not seeing her eyebrows pulled together and up. Which are all micro-expressions of sadness.

Now, someone at home might say “Well Janine, maybe she has Botox”. Maybe she does. But it’s very unlikely that we are not going to see any movement, whether it’s in her eyebrows or here, on her dimples of her lip, the corners of her lip. So we are missing that sadness, yet we see shame.

The entire explanation is below.