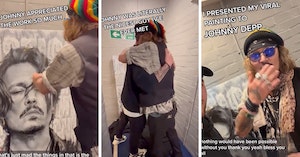 Shortly after Johnny Depp won the defamation lawsuit against ex-wife Amber Heard, he released a statement thanking his fans for their support. It has been a week since then, and one fan had the opportunity to meet Depp and gift a painted portrait to him, for which Depp had a message to share with the world.

On Sunday, June 5, artist Scott Greenwood of Manchester, England posted a video of him bringing a portrait he had painted of Depp.

The original video of him working on the painting had previously gone viral online. The video was posted with the message, “WE GOT MY VIRAL PAINTING TO JOHNNY DEPP!! Thankyou so much! I couldn’t have done it without you All!! 🙏🏼🖤🎨” Greenwood also used the hashtags #JohnnyDeppGotJustice and #JohnnyDeppIsInnocent on his tweet.

“Nothing would have been possible without you,” Depp said to the camera. “Thank you and bless you all.”

The trial, based in Virginia, spanned six weeks and was televised for all to see on the Law & Crime channel. The jury sided with Depp at the end of those long weeks and declared that Heard had defamed her ex-husband with her 2018 Washington Post op-ed about domestic abuse. Depp was awarded a total of $10.35 million in damages, though they also awarded Heard $2 million in damages for statements made during the trial by Depp’s legal team.

Heard released a statement on her social media accounts noting her disappointment in the verdict. Her lawyer has said in an interview that Heard plans to appeal the case.

“The disappointment I feel today is beyond words,” Heard wrote in her statement. “I’m heartbroken that the mountain of evidence still was not enough to stand up to the disproportionate power, influence, and sway of my ex-husband.”

She went on to say, “I’m even more disappointed with what this verdict means for other women. It is a setback. It sets back the clock to a time when a woman who spoke up and spoke out could be publicly shamed and humiliated.”

Depp’s seemingly typewritten statement expressed his gratitude for the support of his fans.

“Six years ago, my life, the life of my children, the lives of those closest to me, and also, the lives of people, who for many, many years have supported and believed in me were forever changed. And after six years, the jury gave me my life back. I am truly humbled.”