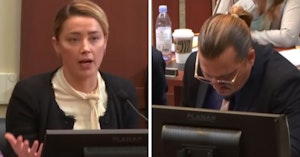 Even as the final week of the defamation trial between Johnny Depp and Amber Heard approaches, there is no shortage of drama in the Virginia courtroom.

While she was on the stand, Heard referred to an alleged incident involving Depp pushing Moss down a staircase.

“I just see my little sister with her … back to the staircase, and Johnny swings at her … I don’t hesitate, I don’t wait—I just, in my head, I just instantly think of Kate Moss and the stairs, and I swung at him,” she said.

Moss and Depp were romantically linked for four years and were rumored to have been engaged at one point before officially calling it quits in 1997.

The staircase story has never been verified by either party.

Once Heard mentioned Moss on the stand, Depp’s lawyer, Benjamin Chew, turned and gave a fist pump to the cross-examiner, Camille Vasquez, and Depp smirked to himself.

A pair of legal experts on TikTok broke down why Johnny Depp and his council are celebrating the mention of Moss.

“OK, so trials are, or at least try to be, controlled environments. You can’t just bring up whatever you want,” Maclen explained.

Allegedly Moss and Depp are still on good terms, which meant Moss’s testimony would have been irrelevant currently in the courtroom.

However, this reference means that Depp’s team may be able to bring Moss on as an impeachment witness to deny the occurrence of the staircase story.

“If the other side brings up something they are not supposed to, then sometimes you get to also,” said Maclen.

This slip-up could allow the council to grill Heard about her 2009 domestic violence arrest with a past partner.

From here on out, it’s up to the judge whether or not this will be allowed to be debated in the upcoming court proceedings.

The last week of the trial begins Monday, May 16th.

Watch a full video about the fist-pump for yourself BELOW.