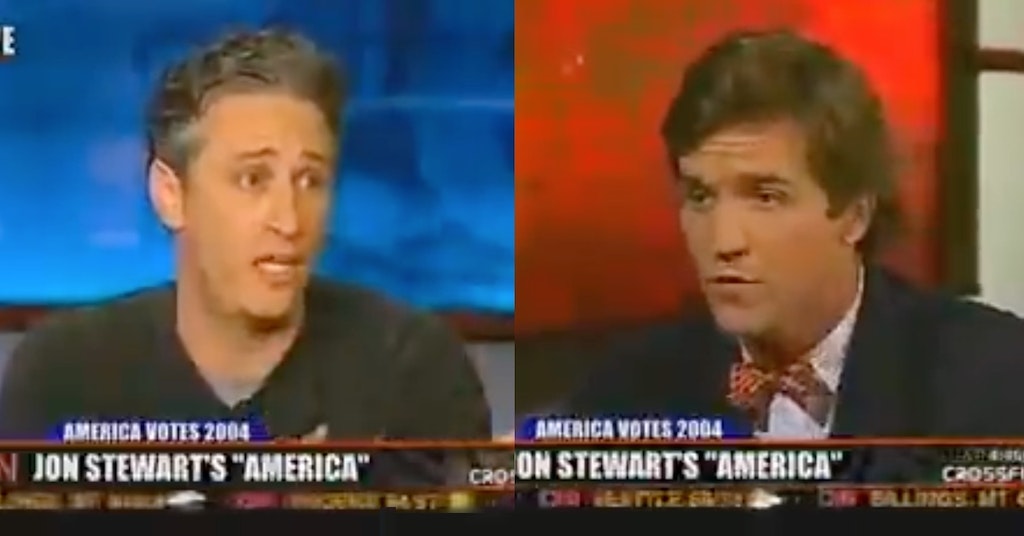 An old clip of Jon Stewart begging Tucker Carlson to start acting responsibly on his show is going viral as people lament how much worse things have gotten.

Stewart appeared on CNN’s Crossfire back in 2004, hosted by Carlson and Paul Begala. The whole episode is dramatic and painful, and even features Stewart famously calling Carlson “as big a d—k on your show as you are on any show.”

The particular clip that’s recirculating this week revolves around the comedian telling both hosts that “what you do is not honest.”

“What you do is partisan hackery,” he continues.

“You invite Kerry on your show and you sniff his throne and you’re accusing us of partisan hackery?” Carlson asks, thinking he’s made a point.

“Absolutely,” Stewart replies. “You’re on CNN. The show that leads into me is puppets making crank phone calls.”

Carlson goes on to call Stewart then-presidential candidate John Kerry’s “butt boy” and try to derail the serious plea Stewart is making to them to be more serious about their jobs.

“You have a responsibility to the public discourse, and you failed miserably,” Stewart says.

Carlson tells him he should “get a job at a journalism school,” to which Stewart quickly fires back: “You need to go to one.”

Eventually, Carlson resorts to his favorite trick of merely talking over Stewart and acting like he’s being ridiculous until he can go to commercial.

At the time, the entire episode was humiliating for Carlson and the show got canceled not too long after the back-and-forth with Stewart aired.

Since then, of course, Carlson has found his home at Fox News, saying just about whatever he wants and simply cutting off anyone who comes on his show and disagrees with him in a way that he can’t talk his way out of.

Tucker Carlson has always been exactly what he is, and while it’s a shame that’s somehow worked for him, it’s nice to see a reminder of just how easily he’s taken down by someone merely pleading for decency.